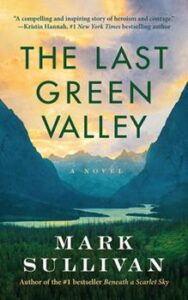 From the author of the #1 bestseller Beneath a Scarlet Sky comes a new historical novel inspired by one family’s incredible story of daring, survival, and triumph.

In late March 1944, as Stalin’s forces push into Ukraine, young Emil and Adeline Martel must make a terrible decision: Do they wait for the Soviet bear’s intrusion and risk being sent to Siberia? Or do they reluctantly follow the wolves—murderous Nazi officers who have pledged to protect “pure-blood” Germans?

The Martels are one of many families of German heritage whose ancestors have farmed in Ukraine for more than a century. But after already living under Stalin’s horrifying regime, Emil and Adeline decide they must run in retreat from their land with the wolves they despise to escape the Soviets and go in search of freedom.

Caught between two warring forces and overcoming horrific trials to pursue their hope of immigrating to the West, the Martels’ story is a brutal, complex, and ultimately triumphant tale that illuminates the extraordinary power of love, faith, and one family’s incredible will to survive and see their dreams realized. (via Goodreads)

Mark Sullivan has been a well-respected author for years with multiple awards to his name, and he wrote the Private series alongside the one and only James Patterson. However, with the release of his 2017 novel, BENEATH A SCARLET SKY, he entered another stratosphere. He produced a work of historical fiction set during World War II, a little-known tale of bravery and hope against all odds featuring an Italian hero named Pino Lella.

Sullivan found his niche: World War II stories revolving around people who very few have heard of but whose voices deserve to be shared with the rest of the world. His continued research landed him his next protagonists — the German-born family living on a farm in Romania during one of the most combustive times in human history. THE LAST GREEN VALLEY is about the Martels, who are literally caught between the Scylla and Charybdis — the evil of Russia’s Josef Stalin and the maniacal Adolf Hitler, the leader of Nazi Germany.

It is late March 1944 when Emil, Adeline and their two boys, Will and Walt, make the difficult decision to leave the shadow of Stalin and head West towards their homeland. To do this, they will have to join a convoy of wagons that is following a team of Nazi SS officers who are retreating to German territory as the European part of the WWII conflict is approaching its end. However, unbeknownst to Emil, an evil from his past is about to reemerge.

The Martels dream of starting over as a family living in a beautiful green valley surrounded by mountains and forests, with a winding river below them. They do not know if this heavenly place is going to be in Europe, Canada or the United States — they just need a vision to latch onto to keep them moving forward. The march is being run by Major Emil Haussmann, an SS officer who Emil had hoped he would never see again. He also runs into a man named Nikolas, who is part of the same caravan. Nikolas recognizes Emil at once, and seeing him brings back memories that Emil would like to forget. Sullivan skillfully does a slow reveal about just what happened to provoke these feelings.

Emil had not shared this story with Adeline and attempts to keep his head down so Haussmann doesn’t remember him. That cover is nearly blown in an incredibly intense moment. Emil knows that he will not be able to escape Haussmann’s memory for much longer, and their trek West is fraught with terror. Another harrowing incident occurs when Emil’s sister falls from the train that the caravan had switched to once they could no longer continue by wagon. In minutes her life is radically changed, and the family has a new burden to carry.

It is during this point in the journey that Haussmann recalls who Emil really is, and while not revealing what he knows, he does everything he can to heap more pressure onto the Martels. The end of the train ride brings them to a camp in Wieluń, Poland. There they are handed new clothes and set up in apartments. Adeline and Emil soon become aware that both the clothes and the apartments had belonged to Jewish families who were dragged away from their homes and sent to concentration camps.

Adeline once worked for Mrs. Kantor, a beloved Jewish friend who treated her well and helped contribute to her happiness. Now Adeline runs into one of Mrs. Kantor’s friends, Esther, who shares that she escaped the slaughter and imprisonment of her fellow Jews by hiding in plain sight and not revealing her heritage. Both Emil and Adeline’s separate relationships to the Jewish people who were at the heart of the European conflict would soon become a joint mission to get away from their SS companions and escape further West to Allied territory.

The Martel family is not at the camp in Poland for long before they are separated, stripped away from Haussmann and sent with several other men to again prove their loyalty. Now the true test of hope and faith for the Martels will be pushed to the limit. While Emil is toiling away in the East and trying to survive day to day, Adeline and the two boys follow his command of “going as far West as they can,” with the promise that he will find them.

Whether or not they will be reunited in the face of this much mounting terror is what drives the final portion of THE LAST GREEN VALLEY. Every reader will be sharing the Martels’ dream of finding that heraldic green valley where they may live out their lives peacefully. I hail Mark Sullivan for doing it again — taking very real, very human stories set during the most intense period in recent world history and providing us with a work of historical fiction that we will not forget anytime soon.

A powerful, often disturbing story of survival during the years surrounding World War II — based on a true story. Awarded four stars on Goodreads.

While not quite as varied a story, in my opinion, as Beneath a Scarlet Sky (also by Mark T. Sullivan) The Last Green Valley remains a compelling story of one family’s struggle under extremely difficult circumstances.

Emil Martel and his wife Adeline are ethnic Germans relocated to the Ukraine as part of Hitler’s plan to expand German influence. As World War II starts to turn against Germany, Nazi officers begin escorting German residents from the Ukraine to Poland, which still remains under German control. Then, of course, that too becomes unsafe.

As the Martels, their children, and their extended families move from place to place — facing difficult travel, inadequate food and lodging, and human brutality — the book completely engulfed me. To the point that I had to take breaks from reading, because of the relentless horror of their lives.

Nevertheless, goodbyes, separations, and deprivation do not shake the dedication of these family members to each other — making the story as inspirational as it is horrific. And recognizing how the Martels represent some 11 million other refugees during the same period put me in awe of what humans can survive.

Fortunately, the ending is a happy one. So you can finish the final chapters with a sense of satisfaction. I recommend the book particularly to those who are interested in an aspect of World War II (i.e. German refugees) than is usually told.