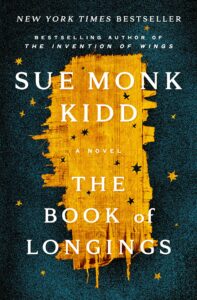 The Book of Longings by Sue Monk Kidd

Ana lives in a time when women are silenced, and their ambition is quelled by the Roman Empire. But she refuses to follow convention and rebels – by voicing her longings and sharing the stories of those who cannot tell them in her writings.

In Sue Monk Kidd’s historical fiction, The Book of Longings, she imagines what a wife of Jesus would be like and the life they would lead together in the 1st Century.

Ana is raised in a world of wealth and privilege. She is a rebel and longs for a life where she can be free to speak her mind and write the stories of the abused, the neglected and the silenced women who touch her heart. Her life changes when she meets Jesus.

“Grounded in meticulous research and written with a reverential approach to Jesus’s life that focuses on his humanity, The Book of Longings is an inspiring, unforgettable account of one woman’s bold struggle to realize the passion and potential inside her while living in a time, place, and culture devised to silence her. It is a triumph of storytelling both timely and timeless, from a masterful writer at the height of her powers.”

Raised in a wealthy family in Sepphoris with ties to the ruler of Galilee, Ana is rebellious and ambitious, a relentless seeker with a brilliant, curious mind and a daring spirit. She yearns for a pursuit worthy of her life, but finds no outlet for her considerable talents. Defying the expectations placed on women, she engages in furtive scholarly pursuits and writes secret narratives about neglected and silenced women. When she meets the eighteen-year-old Jesus, each is drawn to and enriched by the other’s spiritual and philosophical ideas. He becomes a floodgate for her intellect, but also the awakener of her heart.

Their marriage unfolds with love and conflict, humor and pathos in Nazareth, where Ana makes a home with Jesus, his brothers, James and Simon, and their mother, Mary. Here, Ana’s pent-up longings intensify amid the turbulent resistance to the Roman occupation of Israel, partially led by her charismatic adopted brother, Judas. She is sustained by her indomitable aunt Yaltha, who is searching for her long-lost daughter, as well as by other women, including her friend Tabitha, who is sold into slavery after she was raped, and Phasaelis, the shrewd wife of Herod Antipas. Ana’s impetuous streak occasionally invites danger. When one such foray forces her to flee Nazareth for her safety shortly before Jesus’s public ministry begins, she makes her way with Yaltha to Alexandria, where she eventually finds refuge and purpose in unexpected surroundings.

Grounded in meticulous historical research and written with a reverential approach to Jesus’s life that focuses on his humanity, The Book of Longings is an inspiring account of one woman’s bold struggle to realize the passion and potential inside her, while living in a time, place, and culture devised to silence her.

JESUS, MARY — AND ANA.  Writing a novel about Jesus’ wife takes chutzpah, which Sue Monk Kidd appears to have. The veteran author has tackled big subjects before, including faith, slavery, mother-daughter relationships and an affair between a married woman and a monk. But in her fourth novel, now in its second week on the hardcover fiction list, Kidd goes where few writers have ventured before, telling the story of Ana, a first-century woman who falls in love with an 18-year-old Jesus.

The idea for “The Book of Longings” came to Kidd in October 2014 when she read a National Geographic article about a fragment of an ancient manuscript suggesting that Jesus was married. She says, “It turned out to be a fraud, but my imagination was ignited. I thought, if Jesus’ wife ever existed, she would be the most silenced woman in Western history. And that was all it took: I got up every day for four and a half years and tried to give her a voice.”

For the first 14 months, Kidd did an exhaustive amount of research, a process she describes as “both tedious and wondrous.” She watched documentaries and immersed herself in books on Jesus and Palestine. She read about Jewish women philosophers in Alexandria. She pored over journals she kept during a long-ago trip to Egypt, Israel and Jordan.

Once Kidd started writing, she worked for up to eight hours a day — until her Havanese, Barney, arrived to drag her out of the study of her Chapel Hill, N.C., home. Kidd’s daughter, Ann Kidd Taylor, lives next door; she’s a writer, too, and also her mother’s first reader, providing chapter-by-chapter feedback. (In 2009, the two co-authored a memoir, “Traveling With Pomegranates.”)Kidd says she hit a snag after finishing Part 1 of “The Book of Longings.” She realized something was missing: “I did not take writing about a married Jesus lightly by any means. I just had an intuitive sense that I needed more dimension, so I started over on Page 1. Basically it was a huge renovation of what I had — time-consuming, but necessary.”

As always, Kidd maintained two journals while working. One was an account of her efforts, “the ups and downs of the novel, when I begin this part and what that scene was like”; and the other, a sporadic record of “dreams, reflections and creative ideas.” She laughs. “At least I think they’re creative at the time. I just try to make a portal to my inner life. ”

“The Book of Longings is well named, well inspired, and well imagined—a superlative effort from a writer at the top of her game.”

The Book of Longings tells a sweeping story that has never been told: of a woman named Ana, who might have been the wife of Jesus. She begins with the sound of rumbling that Jesus heard in her while they slept together, a thunder, or “my life begging to be born.”

And yet, the Jesus quoted in the bible, the Jesus who is conjured in the hearts of billions of Christians, this Jesus has been assumed to have been celibate. In all the places He’s been brought to life—the bible, the scriptures, the endless repetitions of his adventures passed down from generation to generation, his teachings, his words, his miracles—among all these stories, there is no record of a woman who might have been his wife. It’s a testimony to the strength of patriarchy that few to date have dared to imagine this blasphemous scenario.

But novelist Sue Monk Kidd takes on this high concept challenge and gives it her best. She does her homework many times over in all directions, digging for and finding many details that paint a vivid picture not only of Jesus the man, but the interwoven intricacies of the natural, political and religious world surrounding Jesus prior to his ministry. As part of this world, we see Jesus, a young man meeting Ana as a young woman, both of them recognizing that spark in the other, and falling in love. It’s an intriguing premise, but the best part is that this story is told from the point of view of a woman.

We first meet Ana at 14 years old, learning the meaning of an incantation bowl at the hands of her aunt, Yaltha. Already Ana is full of rebellion and ambition that the sexist world of the time does not allow. Her aunt’s “mouth was the wellspring of thrilling and unpredictable utterances,” says Ana, as they sneak out of the house up onto the roof and Ana learns about “Jewish women who led synagogues, studied with philosophers, wrote poetry and owned houses. Egyptian queens. Female pharaohs. Great Goddesses.” Ana’s ambition is to write stories about women. “We know from her opening narrative that this girl will not only encounter Jesus, but that she is also trouble with a capital ‘T.’”

In a distressing parallel to today’s world where in many countries women are not allowed to learn to read and write, Ana’s “audacities” were reed pens, a writing board, vials of ink, other writing tools as well as the fierce passion to have a voice.

The daughter of a wealthy counselor to the tetrarch, Herod Antipas, Ana has spent her young life cajoling her way into literacy. Initially Matthias had a soft spot for his daughter. “My father suggested that while God was busy knitting me together in my mother’s womb, He’d become distracted and mistakenly endowed me with gifts destined for some baby boy,” says Ana as she explains how he reluctantly gave into his daughter’s begging to be tutored. Although a member of the privileged class, Ana’s troubles are inherent in her gender and throughout the book, her life is threatened not only by her rebellious spirit, but by the many ways women were kept under control simply because of their sex.

In this practically perfect historic novel that fits the well-documented events of Jesus’ life into a very believable narrative, there are many parallels to the distressing reality of women’s status in the world today. Yet there is also a section of the work that is thoroughly ordinary and satisfying to read: the years Ana has with her husband after they marry. Their relationship seems so plausible and it’s easy to imagine Jesus, a kind and truly empathetic soul, who has the utmost respect, admiration, and genuine affection for his feisty bride. Christians who have tried to imagine what Jesus must have been like will come away reassured by Kidd’s portrait. The sense of longing that she creates between these two souls as they endure many forced separations bears testament to the novel’s title and makes for an emotional journey.

Particularly intriguing for those who know all the biblical stories: Ana’s adopted brother is Judas! This alone would have you reading on to see how that could be so, but the novel itself is so well told, with so many believable details and convolutions that you have to stay on board just to see how it all devolves. Details of the times, the scripture, the politics, the attitudes bring to a new focus the context of a story we’ve all heard thousands of times.

Anyone who reads this novel will feel the impending doom inherent in this historic tale. So artfully does Kidd involve the reader with the vibrance and passion of Ana, of the hazard she experiences in a man’s world, of her determined persona and her love for Jesus – that by the time she reunites with her beloved after a long absence, as he struggles barefoot and bleeding with an enormous wooden cross on his back, there is little to buffer feelings of loss and tragedy and sorrow.

The Book of Longings is well named, well inspired, and well imagined—a superlative effort from a writer at the top of her game.