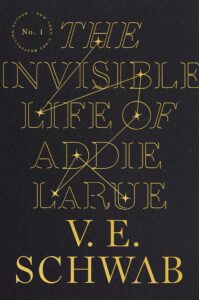 The Invisible Life of Addie LaRue By V.E. Schwab

“A Life No One Will Remember.
A Story You Will Never Forget.”

In 1714, Addie LaRue makes a deal that grants her immortality – but at the cost of being forgotten by everyone she meets.

The story follows Addie on her extraordinary adventures through time; trying to leave her mark on history and on the lives of those who have forgotten her.

The Invisible Life of Addie LaRue by V.E. Schwab has received astounding reviews and awards, including:

BOOK OF THE YEAR (2020) FINALIST—Book of The Month Club

Addie’s desperation to escape an ordinary life leads to a deal with the “devil” – and a curse of infinite life doomed to leave no legacy or trace of her name as she makes her way through time.

Until she meets a man in a hidden bookstore and everything changes.

Getting Lost Helped V.E. Schwab Find the Idea for Her 20th Book

SHED DREAD Ten years ago, at the suggestion of a friend who is no longer a friend, the fantasy author V.E. Schwab relocated from Nashville to Liverpool, England, where she paid 200 pounds per month to live in an unheated garden shed furnished with a single bed and a metal bar for hanging clothes. There was no plumbing. Her landlord was a former prison warden who also owned a neighboring house that was “benignly haunted” by a man who had lived there for 40 years. Schwab says, “You could literally hear his footsteps moving through the halls and down the stairs a few times a day.”

Understandably, the then 23-year-old seized any opportunity for a change of scenery. One day, she hitched a ride with an acquaintance to the Lake District, where she found herself with a free day in the “very remote, beautiful little village” of Ambleside. She says, “I got purposefully lost, something my mother had always told me to do. You know, don’t get too lost, but don’t go with directions in mind.”

Schwab ended up on a six-hour hike into the hills, where she had an epiphany: “I keenly remember sitting down on top of a very tall rise, damp and tired, and thinking to myself, I bet this is what immortality feels like. I wasn’t lonely, but I was deeply aware of my aloneness in that moment.” She had already published one book, “The Near Witch,” and was working on her second, “The Archive.” Suddenly Schwab started to percolate another idea altogether, about what it would be like to live forever: “By the time I got down from that hill, I had the beginning seeds of an idea. It would take me eight years until I actually had the guts to start writing.”

Those seeds sprouted into Schwab’s 20th book, “The Invisible Life of Addie LaRue,” which she describes as “a tale of stubborn hope and defiant joy, about how far we will go to leave a mark on a world that is intent on forgetting us.” The novel is now at No. 4 on the hardcover fiction list.

The Invisible Life of Addie LaRue’ a fantastical new romance from V.E. Schwab

Schwab has released plenty of novels, some of which feature anti-superheroes and fighting fantasy pirates. But her new one is slower, more methodical and romantic than her previous books, yet still bears her touch of magical realism that has gained her a devoted fan base.

Addie LaRue is a young woman in 17th-century France, living with her parents in a small village where people live their whole lives and die within the same mile radius. Addie, however, wishes for more outside of her small town and her parents’ wish that she marry an available bachelor.

As a child, she befriends the old spinster who lives at the edge of town and worships the old gods. It is she who teaches Addie how to pray to the gods – and those you don’t pray to after dark. However, after years of maneuvering and cleverly avoiding marriage, Addie is stuck when her parents finally find a match. In desperation, she escapes her wedding and makes a deal with the Dark for absolute freedom.

But instead of receiving a gift, Addie is cursed. No one can remember her the moment they leave the room or even turn the corner. Her parents see her as a stranger, and no one can remember her for more than a night. She is free of anyone’s memories, thoughts and opinions of her, which also bars her from making any meaningful connections.

To rub salt in the wound, she is also immortal. And for 300 years, she roams the earth alone, surviving on her cleverness, wit and charm until she runs into a bookstore clerk who remembers her.

The novel goes back and forth from past to the present, further informing readers about how Addie survived on her own, the rules of her curse and the loneliness that drives her relationships.

Yet, Addie is self-aware. Schwab beautifully explores what it means to be alone for so long that it’s jarring and terrifying once you are finally seen. The book’s queer representation is also a plus. Although the main romance is between a man and a woman, both of the main characters have had relationships with people of the same sex. This isn’t addressed in a way that feels tokenized but normalizes queerness in opposite-sex couples.

However, the book has its downsides. The pacing is slow, and it takes a while for the main characters to finally meet. A lot of establishing is done in the first quarter of the book that feels tedious and sometimes forgetful. But once these characters meet, the pace picks up.

At the end of the day, this is a romance that centers on Adeline. I did wish at times that the book would explore more of her relationships with other women and how she used them to survive.

Nevertheless, Addie is still an independent and fascinating character who manages to make her mark in spite of the odds.

‘Addie LaRue’ Is Invisible — But Memorable

Addie LaRue was born in France at the very end of the 17th century — but no one remembers that. No one, that is, except for Addie herself and the devil she makes a deal with to escape an unwanted marriage and an ordinary life. But bargaining with wild gods always comes with hidden costs. Addie willingly trades her soul for immortality, but she doesn’t realize until too late that the price of her freedom is her legacy — for now she is doomed to be instantly forgotten by everyone she meets.

What follows is an ouroboros of a tale as Addie slips through time, desperately trying to have some influence on the world and the people she meets. For while she can’t leave a mark or memory in her wake, she finds that she can plant ideas and tend to them, filling art and music with echoes of her presence. Her devil appears occasionally to taunt her and push her, but no hardship he can conjure is enough to make her give in and surrender her immortal life and her soul along with it.

Then, someone remembers her.

Henry is a just a normal guy who works in a bookstore. When Addie steals a book from him, she’s sure he’ll forget her, just like everyone has for the past 300 years. But Henry remembers her. He can say her name. It seems like Addie has finally found a loophole — a cure for her lonely existence. But there’s something Henry isn’t telling her, and it may be enough to bring and end to Addie’s three centuries of resistance and survival.

It’s a bit cheeky to call The Invisible Life of Addie LaRue Faust for romantic bisexual goths, but it’s not wrong.

It is definitely romantic, though it’s not exactly a romance, at least not primarily. Addie is first and foremost infatuated with life, even if it’s a slightly dysfunctional relationship. Her yearning to tell her story and leave her mark is her true love, more yearned for than any boy, girl, or devil. Her escapades through time are sometimes grand and sometimes hardscrabble. Her strange life is itself romantic, as she weaves in and out of history, invisible but ever-present.

Addie and Henry are both bi in a way that feels refreshingly casual for fiction, and other queer characters surround them. Each relationship is unique and beautifully painted, even when they sometimes turn sour as Addie’s lovers slip through her fingers again and again. Because Addie exists on the fringe of people’s lives, she can be whomever she wants, even if it’s only for a day at a time.

And there is an element to this book that feels undeniably and delightfully goth. It features a beautiful black-haired devil made of night and a girl doomed to wander through the years alone and watch everyone she loves forget her and die. What could be more goth than that?

But I think the most unique and interesting thing about Addie LaRue is its relationship to art. In a very clever touch, the different sections of the book are broken up with works of art and the sort of descriptive text that would accompany them if they were being sold at an auction. We’re told the artist, the date, the medium, and then a little bit of a blurb, and in that blurb we see Addie’s influence. Her seven signature freckles, her blur of dark hair — over and over she has attempted to imprint herself in an artist’s mind. A collection of these would almost work as a short story on their own, offering fleeting impressions of a forgotten immortal. Together, they give us a sweeping feeling of urgency as we understand Addie’s longing to be remembered in such a concrete and visceral way.

And while I don’t want to say too much and spoil the effect, I loved that as Addie LaRue unfurls its final pages, we discover that we’ve been a part of her story all along without even knowing it. What might feel meta or too cute in less competent hands, Addie LaRue manages to pull off like the prestige of a particularly elegant magic trick, leaving us with the feeling that we too have been a part of Addie’s long and invisible life. I for one will most certainly remember her.