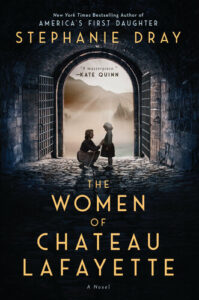 A founding mother…
1774. Gently-bred noblewoman Adrienne Lafayette becomes her husband, the Marquis de Lafayette’s political partner in the fight for American independence. But when their idealism sparks revolution in France and the guillotine threatens everything she holds dear, Adrienne must renounce the complicated man she loves, or risk her life for a legacy that will inspire generations to come.

A daring visionary…
1914. Glittering New York socialite Beatrice Chanler is a force of nature, daunted by nothing—not her humble beginnings, her crumbling marriage, or the outbreak of war. But after witnessing the devastation in France firsthand, Beatrice takes on the challenge of a lifetime: convincing America to fight for what’s right.

A reluctant resistor…
1940. French school-teacher and aspiring artist Marthe Simone has an orphan’s self-reliance and wants nothing to do with war. But as the realities of Nazi occupation transform her life in the isolated castle where she came of age, she makes a discovery that calls into question who she is, and more importantly, who she is willing to become.

Intricately woven and powerfully told, The Women of Chateau Lafayette is a sweeping novel about duty and hope, love and courage, and the strength we take from those who came before us.

The Château de Chavaniac, a beautiful stone castle in the remote reaches of the mountains of Auvergne, is the birthplace of the Marquis de Lafayette, a man who played an integral role in the French Revolution and who famously helped the American colonies win their independence from British rule. In The Women of Chateau Lafayette, the marquis is a mere supporting figure as author Stephanie Dray’s novel instead follows three women over three eras of the château’s history.

First there’s Adrienne Lafayette, the marquis’ wife. History has all but forgotten her role as adviser and strategist to her husband, but she put her life and family at risk in pursuit of liberty for all of France. Then during World War I, Beatrice Astor Chanler, a millionaire’s wife and former actor, uses the family fortune to restore the crumbling château, transforming it into a sanctuary for sick and orphaned children. Finally there’s Marthe Simone, one of those orphans, who grows up at the château and works there as a teacher as the Nazis occupy France. Marthe uses her gift as a talented artist to falsify paperwork and protect Jewish children at the manor.

Dray is a bestselling historical novelist who has previously written about Eliza Hamilton and Patsy Randolph, Thomas Jefferson’s daughter. Her ability to create engaging narratives from history, incorporating rich details and fully drawn characters, is downright magical. Adrienne and Beatrice are both based on real women whose stories come vividly to life here, while Marthe is a composite character inspired by the manor’s female resistance fighters, an artist-in-residence and other figures from the château’s history.

In The Women of Chateau Lafayette, we move among the extravagance of Marie Antoinette’s royal court, the brutality of trench warfare in World War I and the misery of a French countryside slowly starving under Nazi rule. It’s an epic, gripping novel, a powerful depiction of the way brutal conflicts based on prejudice and greed tend to repeat time and again. And through it all, Dray poignantly reminds us of the undervalued contributions of women throughout history.

“I had freed my family by force of will,” says Adrienne. “Not only my family, but those who had been arrested for our sake. I had done it without sacrificing any principle or doing violence. It was not the sort of victory for which people built stone monuments, but I hoped it might still, someday, be remembered.”

Research and Writing: Stephanie Dray is a dependable and popular historical fiction author who puts the history in histfic. Readers expect her ambitious work to be well-researched, thoughtful, and engaging. The Women of Chateau Lafayette does not disappoint! It helped me to take notes in the beginning because the substantial and complex story could have been three separate books, jumping between three very different characters (two based on real people and one fictional), a great deal of historical detail, and three very different time periods. If you’re looking for rich and dense historical fiction, you will be pleased with this story! Although I need to admit that at times my eyes glazed over trying to comprehend the details and political intrigue of the French Revolution! If you find the first half of the book slow going as you become familiar with the characters and settings, you will be pleased that the second half of the book picks up the pace and intensity.

There were a few times that I had to roll my eyes by some modern thinking that was tossed in (one of my pet peeves in historical fiction). One quote: “She made a good argument, though no one ever told a brave husband and father that he must not risk his life. Men like my husband were allowed–may, encouraged–to do great deeds. No one ever asked Willie. But who’s looking after the children when you’re gone?” This seems like modern thinking and a bit anachronistic for a woman in the early years of the 1900s. Does it appear that way to you?

Characters: Stephanie Dray brings us the untold and inspiring stories of three women. Each is well drawn and admirable for her own reasons. Adrienne is a loyal and devoted wife and becomes a true partner with her husband, Lafayette, in every way. She shares his ideals, hosts huge gatherings to support the cause, is clever and brave, and makes incredible sacrifices. Beatrice is brave (making several ocean crossings during WW1…although I wondered about leaving her children for so long when the father wasn’t in the picture), uses her wealth and social standing to further her work with the orphanage, and loves her hats! Marthe is the fictional character (based on a historical composite) in the story. As a young child, she was placed in the orphanage and grew up there. Now (during WW11) she teaches there and is an aspiring artist in her spare time. Her bravery and actions to protect the orphans is remarkable. In addition, her marriage will surprise you! (***spoiler: it is my favorite relationship in the story!) Chateau Lafayette needs to be considered a character also as it connects and holds the entire story together. Don’t miss the author’s notes.

1. Which heroine’s story did you enjoy reading the most?
2. In what ways can Adrienne be considered our French Founding Mother?
3. How does Marthe change, grow, and mature over the course of the book? Particularly with regard to why she should care about world events over which she felt she had so little control or influence?