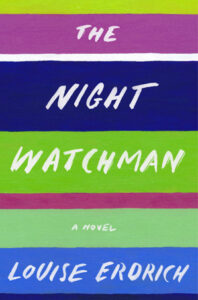 The Night Watchman by Louise Erdrich

The Night Watchman portrays life in the 1950’s of the Turtle Mountain Band of Chippewa in North Dakota. Thomas Wazhashk works as a night watchman of a jewel factory. Patrice “Pixie” Paranteau supports her family by working at the same factory by day.

Author Louise Erdrich based the story on the life of her grandfather, Patrick Gourneau, and his efforts to save his tribe from termination. The complex characters struggle to survive as individuals – and as a tribe. They face threats from the United States Congress, unhealthy family dynamics, poverty, identity and love.

The characters are dynamic and captivating – Erdrich weaves their unique journeys into an interrelated tale filled with grief, horror, comedy and romance.

This book’s many awards include:

Early in this banquet of a novel that invites us back into Louise Erdrich’s ongoing Chippewa chronicles, a character on the reservation boasts, “Law can’t take my Indian out of me.” Unfortunately, the United States government is hoping to do just that through the Termination Bill, an Orwellian plan that promises to “emancipate” Indigenous people from their lands and their tribal affiliations. This isn’t in 1893; the novel takes place in the 1950s. Even that might sound like distant history — but part of Erdrich’s point is that little has changed: As she reminds us in an afterword, the Trump administration has recently tried to terminate the Wampanoag, “the tribe who first welcomed Pilgrims to these shores and invented Thanksgiving.”

In this season of literary wildfires, when cultural borrowings have unleashed protests that have shaken the publishing industry, the issue of authenticity is paramount. Erdrich retakes the lead by offering the reader the gifts of love and richness that only a deeply connected writer can provide. You never doubt these are her people. The author of “Love Medicine,” “Tracks” and “The Round House,” among her 22 books for adults, she delivers a magisterial epic that brings her power of witness to every page. High drama, low comedy, ghost stories, mystical visions, family and tribal lore — wed to a surprising outbreak of enthusiasm for boxing matches — mix with political fervor and a terrifying undercurrent of predation and violence against women. For 450 pages, we are grateful to be allowed into this world.

The novel’s title character, Thomas Wazhashk, is a night watchman for a factory where women of the Turtle Mountain clan work by day, using gemstones as drill bits for Defense Department ordnance and for Bulova watches. Among these working women is Thomas’s niece, Patrice, known against her will as Pixie. Thomas watches over the dark, possibly haunted factory to protect these gems from thieves. The novel follows the fates and struggles and adventures of these two people and the ever-expanding circles of their relations.

[ Read an excerpt from “The Night Watchman.” ]

Inspired by Erdrich’s grandfather and the voluminous letters he sent to politicians in Washington in an effort to save his tribe from termination, the character of Thomas emerges as a complex, brilliant, troubled leader who spends his nights in the factory composing endless entreaties to those in power while he struggles to stay awake. He is hungry and exhausted, and when beset by visions and visitations, he is unsure which might be real and which might be dreams. By day, he is a devoted husband, a family man, a political organizer. He is a great companion, given to mercy. He tells a weepy white man who wants to marry Pixie in the hope that this will make him an Indian: “No … you could not be an Indian. But we could like you anyway.” His ultimate devotion is to his powerful wife, Rose.

In this unhurried, kaleidoscopic story, the efforts of Native Americans to save their lands from being taken away by the U.S. government in the early 1950s come intimately, vividly to life.

Erdrich’s grandfather Patrick Gourneau was part of the first generation born on the Turtle Mountain Reservation in North Dakota. As the chairman of the Turtle Mountain Band of Chippewa in the mid-1950s, he had to use all the political savvy he could muster to dissuade Utah Sen. Arthur V. Watkins (whom Erdrich calls a “pompous racist” in her afterword) from reneging on long-held treaties between Native Americans and the federal government. Erdrich’s grandfather is the inspiration for her novel’s protagonist, Thomas Wazhushk, the night watchman of the title. He gets his last name from the muskrat, “the lowly, hardworking, water-loving rodent,” and Thomas is a hard worker himself: In between his rounds at a local factory, at first uncertain he can really help his tribe, he organizes its members and writes letters to politicians, “these official men with their satisfied soft faces,” opposing Watkins’ efforts at “terminating” their reservation. Erdrich reveals Thomas’ character at night when he’s alone; still reliable and self-sacrificing, he becomes more human, like the night he locks himself out of the factory, almost freezes to death, and encounters a vision of beings, “filmy and brightly indistinct,” descending from the stars, including Jesus Christ, who “looked just like the others.” Patrice Paranteau is Thomas’ niece, and she’s saddled with a raging alcoholic father and financial responsibility for her mother and brother. Her sister, Vera, deserts the reservation for Minneapolis; in the novel’s most suspenseful episode, Patrice boldly leaves home for the first time to find her sister, although all signs point to a bad outcome for Vera. Patrice grows up quickly as she navigates the city’s underbelly. Although the stakes for the residents of Turtle Mountain will be apocalyptic if their tribe is terminated, the novel is more an affectionate sketchbook of the personalities living at Turtle Mountain than a tightly plotted arc that moves from initial desperation to political triumph. Thomas’ boyhood friend Roderick returns as a ghost who troubles Thomas in his night rounds, for example; Patrice sleeps close to a bear and is vastly changed; two young men battle for Patrice’s heart.

A knowing, loving evocation of people trying to survive with their personalities and traditions intact.

Based on the extraordinary life of National Book Award-winning author Louise Erdrich’s  grandfather who worked as a night watchman and carried the fight against Native dispossession from rural North Dakota all the way to Washington, D.C., this powerful novel explores themes of love and death with lightness and gravity and unfolds with the elegant prose, sly humor, and depth of feeling of a master craftsman.

Thomas Wazhashk is the night watchman at the jewel bearing plant, the first factory located near the Turtle Mountain Reservation in rural North Dakota. He is also a Chippewa Council member who is trying to understand the consequences of a new “emancipation” bill on its way to the floor of the United States Congress. It is 1953 and he and the other council members know the bill isn’t about freedom; Congress is fed up with Indians. The bill is a “termination” that threatens the rights of Native Americans to their land and their very identity. How can the government abandon treaties made in good faith with Native Americans “for as long as the grasses shall grow, and the rivers run”?

Since graduating high school, Pixie Paranteau has insisted that everyone call her Patrice. Unlike most of the girls on the reservation, Patrice, the class valedictorian, has no desire to wear herself down with a husband and kids. She makes jewel bearings at the plant, a job that barely pays her enough to support her mother and brother. Patrice’s shameful alcoholic father returns home sporadically to terrorize his wife and children and bully her for money. But Patrice needs every penny to follow her beloved older sister, Vera, who moved to the big city of Minneapolis. Vera may have disappeared; she hasn’t been in touch in months, and is rumored to have had a baby. Determined to find Vera and her child, Patrice makes a fateful trip to Minnesota that introduces her to unexpected forms of exploitation and violence, and endangers her life.

Thomas and Patrice live in this impoverished reservation community along with young Chippewa boxer Wood Mountain and his mother Juggie Blue, her niece and Patrice’s best friend Valentine, and Stack Barnes, the white high school math teacher and boxing coach who is hopelessly in love with Patrice.

In the Night Watchman, Louise Erdrich creates a fictional world populated with memorable characters who are forced to grapple with the worst and best impulses of human nature. Illuminating the loves and lives, the desires and ambitions of these characters with compassion, wit, and intelligence, The Night Watchman is a majestic work of fiction from this revered cultural treasure.