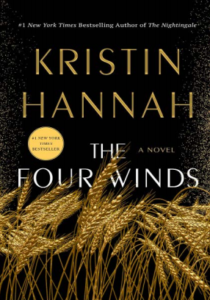 The Four Winds by Kristin Hannah

Kristin Hannah’s latest novel, The Four Winds, is one of the most highly anticipated books of 2021.

“If I close my eyes, I can still taste the dust …”

The epic historical fiction follows Elsa Martinelli and her desperate battle to keep her children alive during the Great Depression.

It is a sweeping novel, richly told, that brings to life the harsh realities of the 1930’s American financial crisis and Dust Bowl era. Where a mother must make an agonizing choice – to battle against nature to stay on the land with those that they love, or to gamble it all and move west towards a future unknown?

Hannah’s writing evokes the terror of dust storms, the harshness of the heat, and the unrelenting fear of starvation.

“Through one woman’s survival during the harsh and haunting Dust Bowl, master storyteller, Kristin Hannah, reminds us that the human heart and our Earth are as tough, yet as fragile, as a change in the wind. This mother’s soul, suffering the same drought as the land, attempts to cross deserts and beat starvation to save her children with a fierce inner strength called motherhood. A timely novel highlighting the worth and delicate nature of Nature itself.” —Delia Owens, author of Where The Crawdads Sing

Elsa’s journey is one of heartbreak, strength, hope, and enduring love.

‘The Four Winds’ is Kristin Hannah’s next inevitable bestseller. Don’t forget the tissues.

Labor is hot. Look for the union label in the pages of a best-selling novel lately, and you might find it.

Last fall, Jess Walter published “The Cold Millions,” a terrific story about union organizers in Spokane, Wash., in the early 20th century. The Washington Post named it one of the top 10 books of 2020.

I’ve been looking forward to The Four Winds for quite some time! I knew this would be a big hit for 2021 and that’s why I included it in my huge must-read book club picks for 2021 list. This is the exact kind of novel that is perfect for book clubs. A historical fiction story that is completely relevant to our current situation with the pandemic and also climate change. It’s eerie how history does tend to repeat itself in various ways.

And of course, Kristin Hannah is one of the best writers out there. So you also get a sweeping story that is quite emotional. I’m fairly certain every Kristin Hannah story has made me cry at the end and it was no different with The Four Winds. I’m talking full on tears at the end! I still believe The Nightingale is her best work to date but The Four Winds is very close. I can’t recommend this one enough.

The Synopsis
Texas, 1921. A time of abundance. The Great War is over, the bounty of the land is plentiful, and America is on the brink of a new and optimistic era. But for Elsa Wolcott, deemed too old to marry in a time when marriage is a woman’s only option, the future seems bleak. Until the night she meets Rafe Martinelli and decides to change the direction of her life. With her reputation in ruin, there is only one respectable choice: marriage to a man she barely knows.

By 1934, the world has changed; millions are out of work and drought has devastated the Great Plains. Farmers are fighting to keep their land and their livelihoods as crops fail and water dries up and the earth cracks open. Dust storms roll relentlessly across the plains. Everything on the Martinelli farm is dying, including Elsa’s tenuous marriage; each day is a desperate battle against nature and a fight to keep her children alive.

In this uncertain and perilous time, Elsa—like so many of her neighbors—must make an agonizing choice: fight for the land she loves or leave it behind and go west, to California, in search of a better life for her family.

The Four Winds is a rich, sweeping novel that stunningly brings to life the Great Depression and the people who lived through it—the harsh realities that divided us as a nation and the enduring battle between the haves and the have-nots. A testament to hope, resilience, and the strength of the human spirit to survive adversity, The Four Winds is an indelible portrait of America and the American dream, as seen through the eyes of one indomitable woman whose courage and sacrifice will come to define a generation.

Elsa
We read the story from the perspectives of Elsa and her teenage daughter, Loreda. The story starts off with Elsa feeling very isolated at her family home. A heart condition has crippled her parents’ perspective of her so that they don’t believe she’ll accomplish anything nor will anyone want to marry her. Her parents are so cruel—it’s quite shocking.

When the charming and naive Rafe shows an interest in Elsa, everything changes from that point forward. She gets pregnant (with Loreda) and Rafe is forced to give up his parents dream of him going to college, while Elsa is banished from her home forever. She moves to the Martinelli farm and is eventually embraced as one of their own by Rafe’s parents.

While the marriage is far from a dream, Elsa finds her place at the farm. And when times are good, it’s great. But then, it all changes when the drought invades the precious land. Everyone is then forced to make decisions that will have life alternating impacts.

I liked Elsa quite a bit and I really felt for her so many times in her journey. All she wants is love and to be loved in return. But she doesn’t get that from her husband and when Loreda becomes a teenager, she resents everything her mom represents. But through all the hardships, Elsa’s strength and resilience throughout the story is inspiring and impactful.

Loreda, unlike her mother, is a dreamer. She believes there’s so much more out there than the farm life and feels suffocated. I do think the reader can feel both frustrated with how Loreda treats her mother but also understanding of how she feels so trapped. The devastation of the land really forces Loreda to grow up quite a bit. Her character development is very strong and she finds her voice in more ways than one.

History Component
If you’ve visited Book Club Chat in the past, you know that I’m a big fan of historical fiction. And it really boils down to this reason: you’ll learn something new about either a historical figure or a moment in history. We all know about the Dust Bowl and many of us had to read The Grapes of Wrath in high school. But I really learned quite a bit from reading The Four Winds—more so than in my Oklahoma history class in high school (I grew in Oklahoma)! I had no idea about the manmade problem that helped contribute to the devastation, which is something that can be witnessed today with the impacts of climate change.

It’s also interesting, and bizarre, to read about how “okies” was such a slang word used to represent anyone fleeing the broken farms for a better life in California. These people had nothing to their name and it seemed many CA locals didn’t let them forget it. It’s quite heart wrenching to read the cruelty towards poverty, but there are some kind people who make an appearance too.

Verdict
I loved this story. It had everything I want in a historical fiction novel. It’s impactful, devastating, but also full of heart. If you’re reading this with your book club, check out my book club questions here.

For devoted Hannah fans in search of a good cry.

The miseries of the Depression and Dust Bowl years shape the destiny of a Texas family.

“Hope is a coin I carry: an American penny, given to me by a man I came to love. There were times in my journey when I felt as if that penny and the hope it represented were the only things that kept me going.” We meet Elsa Wolcott in Dalhart, Texas, in 1921, on the eve of her 25th birthday, and wind up with her in California in 1936 in a saga of almost unrelieved woe. Despised by her shallow parents and sisters for being sickly and unattractive—“too tall, too thin, too pale, too unsure of herself”—Elsa escapes their cruelty when a single night of abandon leads to pregnancy and forced marriage to the son of Italian immigrant farmers. Though she finds some joy working the land, tending the animals, and learning her way around Mama Rose’s kitchen, her marriage is never happy, the pleasures of early motherhood are brief, and soon the disastrous droughts of the 1930s drive all the farmers of the area to despair and starvation. Elsa’s search for a better life for her children takes them out west to California, where things turn out to be even worse. While she never overcomes her low self-esteem about her looks, Elsa displays an iron core of character and courage as she faces dust storms, floods, hunger riots, homelessness, poverty, the misery of migrant labor, bigotry, union busting, violent goons, and more. The pedantic aims of the novel are hard to ignore as Hannah embodies her history lesson in what feels like a series of sepia- toned postcards depicting melodramatic scenes and clichéd emotions.

For devoted Hannah fans in search of a good cry.