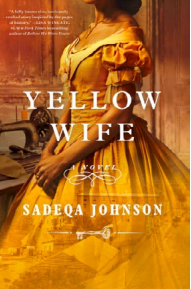 “Johnson writes with imagery so vivid that it’s impossible to look away, even during gut-wrenching moments. Readers will be engulfed in captivating suspense…” – BOOKLIST

In Yellow Wife, author Sadeqa Johnson writes the harrowing story of an enslaved woman forced to barter love and freedom while living in the most infamous slave jail in Virginia.

Born on a plantation in Charles City, Virginia, Pheby Delores Brown has lived a relatively sheltered life. Shielded by her mother’s position as the estate’s medicine woman and cherished by the Master’s sister, she is set apart from the others on the plantation, belonging to neither world.
She’d been promised freedom on her eighteenth birthday, but instead of the idyllic life she imagined with her true love, Essex Henry, Pheby is forced to leave the only home she has ever known.

She unexpectedly finds herself thrust into the bowels of slavery at the infamous Devil’s Half Acre, a jail in Richmond, Virginia, where the enslaved are broken, tortured, and sold every day. There, Pheby is exposed not just to her Jailer’s cruelty but also to his contradictions.

To survive, Pheby will have to outwit him, and she soon faces the ultimate sacrifice.

Through the eyes of a character with uncommon access and compassion, Sadeqa Johnson’s novel “The Yellow Wife” evokes a vision of one woman’s tenacious survival of antebellum cruelty and objectification.

The daughter of an enslaved healer and seamstress and her White master, Pheby Delores Brown grows up in a kind of in-between state. “Problem with being high yella,” an enslaved woman tells Pheby after her father’s wife slaps her, “that handprint gonna be on your face all day long.” Though she labors on the plantation, her father secretly encourages her education and assures her she’ll be freed on her 18th birthday.

Disregarding that promise, her father’s wife sells her out of spite. Pheby is marched to a faraway slave jail, where her new master, Rubin Lapier, torments her, making her his favored companion, mistress of his slave auction house and brothel, mother to his children and bearer of his abuse. Pheby soon learns to fear Lapier, a dread she suffers for the rest of her time on his compound, known as “the Devil’s Half Acre.”

Before her arrival at the jail, Pheby’s perspective feels naive and unspecific. Despite being warned against conceiving a baby while she is enslaved, Pheby has a tryst with a lover and later wonders, “How could I be carrying a child?” She frequently uses her imagination to escape her desolation, at one point dreaming of her mother: “I coasted off again and could not only see Mama, I could also smell her.” Her mother’s familiar scent clearly moves Pheby, but no description invites the reader to share the feeling. She relates events as they happen to her but only inconsistently anchors them in the details, dialogue or personal emotions that would give Pheby’s character texture and singularity.

As Pheby settles into life under Lapier’s brutal surveillance, her point of view becomes a more essential window to the story. She witnesses the jail’s daily operations and institutional horrors, and her unique position enables her to engage in acts of defiance. Sometimes small and mundane, sometimes dangerous and overt, it is these acts that most illuminate Pheby’s particular care and resourcefulness. “It was time for me to become my own savior,” she realizes. “My days as a girl were gone. Now I had to think like a woman.” She marshals her means to do what she can, always aware that her survival depends on acting the part of a loving wife to her slave master. When Lapier calls for her, she notes, “I hated the way he made my name sound like a question, when it was most certainly a command.”

The high wire Pheby balances on provides the novel’s keenest tension, but its potential is sometimes lost among underserved narrative threads and plot points that don’t pay off. Ultimately, Johnson’s author’s note may be the most fascinating chapter of all: a description of the true stories that inspired the novel.

Pheby Delores Brown, the novel’s narrator, was born on a Virginia plantation to its owner, Jacob Bell, and Ruth, one of the women enslaved there. As a child, Pheby was sheltered from much of the harshness of slavery, even taught to play the piano and to read, although the latter is against the law. Pheby is almost 18—the age at which Jacob has promised to free her—when the book opens in 1850. But Jacob has married a younger wife, Delphina, who resents Ruth and Pheby bitterly. When Jacob takes Ruth on a trip, Delphina sells Pheby to a slave trader. Roped into a coffle with dozens of other enslaved people for the long walk to Richmond, she is thrust into a nightmare of brutal, dehumanizing treatment. In Richmond, at a notorious slave trading center called the Jail, light-skinned, pretty Pheby is marked for sale as a “fancy girl.” But Rubin Lapier, the White man who owns the Jail, claims her for himself even though she is pregnant with the son of Essex Henry, a stable hand at the Bell plantation, now a runaway. Although Richmond’s White elite get their wealth from slaveholding, traders like Lapier are considered disreputable enough that White women will not marry them. Pheby becomes his “yellow wife,” running his household and bearing him five children. Johnson’s first-person narration gives the reader a window into the terrible burden of doubleness that Pheby carries, always performing submission to keep herself and her children safe, painfully aware that behind Lapier’s usually courteous treatment of her is a ruthless sadism. As time passes, she realizes she must find a way to send her Black son, Monroe, to freedom before Lapier sells him (or worse) in some fit of anger, and her life becomes much more dangerous. Johnson is unsparing in her depiction of the physical, psychological, and spiritual damages wrought by slavery and realistic in her portrayal of the heroism of Pheby and others in resisting it—they cannot change the world, but they do what they can, and sometimes that’s extraordinary.

A horrifying but ultimately moving story anchored by a complex narrator.