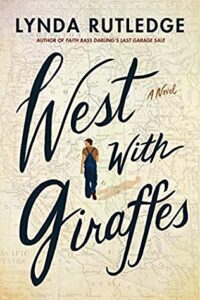 West with giraffes by Lynda Rutledge

“A perfect balance between history and fiction… Rutledge blends fictional characters with real historical personalities to create a story that is equal parts educational, quirky, and romantic.”
–POPSUGAR.com

West with Giraffes is Austin writer Lynda Rutledge’s second novel, preceded by Faith Bass Darling’s Last Garage Sale, winner of a 2013 Writers’ League of Texas Book Award. While conducting research in the archives of the San Diego Zoo, Rutledge came across a trove of newspaper articles about two giraffes that had survived a hurricane on the deck of a freighter and a cross-country trip, from New York to California, in 1938. Inspiration struck, and the result is this charming and wondrous enchantment of a novel.

The tale is told through Nickel’s memoir as he writes it in the VA hospital, in a race against time the avenger, the historical story unfolding in first-person narration, regularly interrupted by various nurses and orderlies doing their utmost to convince this cantankerous author-on-a-mission to rest, eat, or take a pill already; he is 105 years old. Even the foreshadowing of tragedy manages to be funny.

The plot unfolds fast and steady, with a surprise down every highway. The dialogue is simple, as related by a seventeen-year-old from the sticks, sometimes clever, sometimes sweet, always true. Nickel says of Augusta, “If Red’s heart was already broken, mine had barely been used . . . her face full of things I did not understand yet was desperate to remember.”

“A delightful read, I couldn’t put it down. Told through the memory of an aged veteran, the story is set against the background of the Dust Bowl, the Depression and the advent of a World War. This improbable, but fact-based, story of two giraffes transported cross country in what was basically an over-balanced flatbed truck made me laugh, cry. and actually care about the dangers they were experiencing. A touch of unrequited romance, a bit of larceny and a droll sense of humor kept me entranced to the end. This book stays in my library for later rereading.”