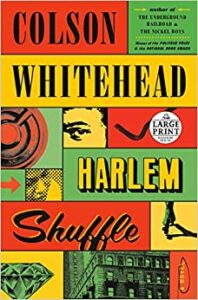 “Ray Carney was only slightly bent when it came to being crooked…” To his customers and neighbors on 125th street, Carney is an upstanding salesman of reasonably priced furniture, making a decent life for himself and his family. He and his wife Elizabeth are expecting their second child, and if her parents on Striver’s Row don’t approve of him or their cramped apartment across from the subway tracks, it’s still home.

Few people know he descends from a line of uptown hoods and crooks, and that his façade of normalcy has more than a few cracks in it. Cracks that are getting bigger all the time. Cash is tight, especially with all those installment-plan sofas, so if his cousin Freddie occasionally drops off the odd ring or necklace, Ray doesn’t ask where it comes from. He knows a discreet jeweler downtown who doesn’t ask questions, either.

Then Freddie falls in with a crew who plan to rob the Hotel Theresa — the “Waldorf of Harlem” — and volunteers Ray’s services as the fence. The heist doesn’t go as planned; they rarely do. Now Ray has a new clientele, one made up of shady cops, vicious local gangsters, two-bit pornographers, and other assorted Harlem lowlifes.

Thus begins the internal tussle between Ray the striver and Ray the crook. As Ray navigates this double life, he begins to see who actually pulls the strings in Harlem. Can Ray avoid getting killed, save his cousin, and grab his share of the big score, all while maintaining his reputation as the go-to source for all your quality home furniture needs?

Harlem Shuffle’s ingenious story plays out in a beautifully recreated New York City of the early 1960s. It’s a family saga masquerading as a crime novel, a hilarious morality play, a social novel about race and power, and ultimately a love letter to Harlem.

A heist with a cast of zany characters, tongue-in-cheek dialogue, questionable criminal skills, and of course, a bumbling, incompetent thief or two are undoubtedly part of the charm of Colson Whitehead’s Harlem Shuffle. But the novel is also a powerful tale of a man’s love for his family and the neighborhood where he lives. And the man at the center of that tale is a devastatingly enjoyable character who has a true gift for words — if not always the smartest actions.

The novel begins in 1959. Ray Carney is a young husband and father, and the owner of Carney’s Furniture on Harlem’s famed 125th Street. It’s a decent business — but not lucrative enough to allow him to move his family to his Upper West Side dream home on scenic Riverside Drive. Ray has a lot of family and history in Harlem; he and his cousin Freddie grew up together, and they’re close in that way two brotherless relatives can become super tight when they share their formative years. But Freddie is also that guy who seems to find trouble in his sleep. Through no fault of his own (but some faults of Freddie), Carney gets involved in a heist at the Hotel Theresa, also known as the Waldorf of Harlem. The ramifications of this theft and Carney’s reluctant involvement trigger a series of events, near-misses, murders, tragedies, and thrills that drive the novel’s action.

Let me say that I adored Ray Carney. He loves his wife and his immediate family without pause or hesitation. He has a biting wit and is often a philosopher, providing insightful commentary on his time and community. On the other hand, his cantankerous in-laws absolutely can’t stand him – for one thing, he’s darker than their light-skinned daughter, and he isn’t part of the “Talented Tenth” they’d preferred she marry.

Outwardly, Carney is always chill. Inside he is a man of doubts and second guesses — but his view of the world can be knee-slappingly funny at times. The son of a crook, Carney points out early on “he’s only slightly bent when it comes to being crooked.” It is one of the most insightful statements he makes. But is it true or false?

Whitehead weaves historical figures, events, and language throughout the novel. One of the funniest passages, oddly enough, takes place during the Harlem riots of 1964 (six days of rioting in Harlem after a white off-duty police officer shot and killed a Black teenager). All that upheaval doesn’t mean much to a character in search of a snack.

I especially enjoyed Whitehead’s prose, so vividly cinematic it brought to mind some of my favorite gritty heist films — classics old and new like The Asphalt Jungle and The Usual Suspects, or the more recent Widows (and yes, I would love to see this made into a movie). And every paragraph is full of authentic voices and perfectly deployed profanity, which adds to the you-are-there feeling, sitting in the backroom of the furniture store or at the bar at the Nightbirds with Carney, Freddie, Miami Joe, Pepper and Tommy Lips. There are some riveting female characters, too — of course, Carney’s wife Elizabeth and Lucinda Cole, Miss Laura, and Aunt Millie. But this is Ray’s book.

And this is Ray’s community and neighborhood. We take in the people, sights, and sounds of Harlem from his point of view, from chapter to chapter, from year to year. Whitehead has created a character who exemplifies the classic heist anti-hero while also giving the reader a penetrating look into a Black man’s life in Harlem in the 1960s and the circumstances he might not be able to avoid. No matter how much trouble he finds, we can’t help but root for Ray Carney every step of the way.

Colson Whitehead has a couple of Pulitzers under his belt, along with several other awards celebrating his outstanding novels. Harlem Shuffle is a suspenseful crime thriller that’s sure to add to the tally — it’s a fabulous novel you must read.

For more than 20 years Colson Whitehead has delivered novels notable for cultural satire, racial allegory, genre expansion and quirkiness: The Intuitionist, Sag Harbor, Zone One, The Underground Railroad (Pulitzer #1), The Nickel Boys (Pulitzer #2). In his eighth novel, Harlem Shuffle, Whitehead offers a literary crime saga that is as delicious as it is nutritious, a much lighter meal than his previous two novels, which emerge from the real-life atrocities of slavery and a brutal reform school in the American south. Whether in high literary form or entertaining, page-turner mode, the man is simply incapable of writing a bad book.

Set in the early 1960s, Harlem Shuffle is an extraordinary story about an ordinary man. Furniture salesman Ray Carney is a good guy gone wrong, like Walter White in Breaking Bad. He gets sucked into schemes and heists through his cousin Freddie, whom parents would call “a bad influence” (and Freddie himself has his own “bad influences”).

The ordinary-Joe-furniture-salesman aspect of Carney’s life gets restated a touch too much in the novel, as do his sleepless nights spent in worry, though, understandably, the novel’s premise hangs on his double life. The pleasure of the plot lies in discovering what kind of trouble an ordinary man can get into, and how or whether he’ll get out. Crime novels risk becoming formulaic, like action movies. While there aren’t any car chases or Tarantino-style fight scenes in Harlem Shuffle, Whitehead capably fulfils the genre’s expectations while gently parodying them. A hilarious fight scene, for example: “It would not be accurate to say that the two men fought or wrestled. More like they gripped each other’s upper arms and shook … It was a low-key battle, a mutual trembling.”

The novel is structured in three instalments, covering a period from 1959 to 1964, each climactically peaking with criminal activity. Act 1 shows how easily a man can step downward into crime. Act 2 considers Carney’s upward criminal climb. We could call this the illusion of advancement; we all get suckered into it. “The mistake was to believe he’d become someone else.” Act 3 considers whether a man should step up to help others. What’s our responsibility to the greater social good? The three parts present our options: descent, personal advancement, social progress. Or Inferno, Purgatorio, Paradiso.

The three acts could make satisfying novellas on their own, but they’re better together. The novel gains force through accumulation and acceleration – brake and gas, gas and brake, until we are far from where we started. In one or two sentences at the end of a chapter, Whitehead can change the book’s whole trajectory.

Set 60 years ago, the novel nonetheless has a number of parallels to our time. There’s a delight in taking down powerful people who believed themselves invulnerable to consequences. There’s the expansion of empire and wealth. Some people aspire to own houses, while others own entire buildings. There’s the chillingly familiar racial unrest, down to a shooting that incites protests. In the novel, two leaflets circulate as potential paths to an equitable and just society. The first gives instructions on how to build a bomb. The wording on the second nudges us toward patient cooperation: “COOL IT BABY.” Thankfully, Whitehead is never sermonising or sentimental.

It may be inevitable that we read the novel as an allegory for our time, but a book’s merits ought not to be determined by its relevance to our present. Rather, we can extend ourselves in its direction, toward the 60s, toward Carney’s extreme moral struggles. Whitehead makes it easy for us to live in that period and place, so well rendered is his Harlem. Harlem Shuffle is yet another novel that New Yorkers are going to lovingly claim.

If Harlem Shuffle is your introduction to Whitehead, you’ll discover a writer with range. Without being pretentious or phony, he can use a verb like bivouac then convincingly switch registers and write: “That was a whole nother story.” His humour can arise from absurdity (crooks get paid in cash and discounted furniture), from parody (a wealthy man snobbishly describes the New York subway as “a filthy cage for filthy people”), even from gangster nicknames. Meet Yea Big, Pepper, Miami Joe, Chet the Vet (who got his name because he went to vet school – for a month). Whitehead counterbalances humour with insight.

And finally, you’ll discover a tenderness beneath the swagger. Whitehead draws his roster of secondary characters, especially the ones that could easily become stock figures such as crime bosses and petty thieves, with as much care as the primary ones. His portraits are never mean-spirited; instead, Whitehead renders the humanity of hustlers. He gets their sweetness down. Some of them have clean aspirations of farm life or higher education. He makes us love them the way their mamas must. Take, for example, Pepper, an enforcer who would be played perfectly by Samuel L Jackson. He asks our humble furniture salesman, Carney: “What made you want to sell couches?” Carney replies: “I’m an entrepreneur.” “‘Entrepreneur?’ Pepper said the last part like manure. ‘That’s just a hustler who pays taxes.’”