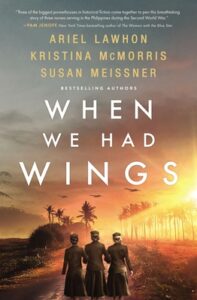 Last year, we read Susan Meissner’s The Nature of Fragile Things and not only fell in love with the book but also her writing style. When I saw that she had co-written another novel with two other best-selling authors, I was more than intrigued.

When We Had Wings is another selection featuring nurses as the protagonist(s). In the current book I am writing, my protagonist was a nurse during the Civil War which might explain my current obsession with early nursing practices and the medical field. I find my writing has enormous impact on my reading these days. This novel will be the first book that we’ve read with multiple authors. I can’t wait to hear your impressions!

We have been fortunate to have had so many authors join us at our monthly book club meetings. To date, I have not yet snagged one of the authors to join us in our monthly discussion. But I’m working it!

Because of Thanksgiving, this month we will be meeting on Thursday, December 1 at 7pm EST. Please mark your calendar to join us. Until then, I hope you find When We Had Wings as enthralling as I did.

The Philippines, 1941. When U.S. Navy nurse Eleanor Lindstrom, U.S. Army nurse Penny Franklin, and Filipina nurse Lita Capel forge a friendship at the Army Navy Club in Manila, they believe they’re living a paradise assignment. All three are seeking a way to escape their pasts, but soon the beauty and promise of their surroundings give way to the heavy mantle of war.

Caught in the crosshairs of a fight between the U.S. military and the Imperial Japanese Army for control of the Philippine Islands, the nurses are forced to serve under combat conditions and, ultimately, endure captivity as the first female prisoners of the Second World War. As their resiliency is tested in the face of squalid living arrangements, food shortages, and the enemy’s blatant disregard for the articles of the Geneva Convention, the women strive to keep their hope— and their fellow inmates—alive, though not without great cost.

“Three fierce women from differing backgrounds come together in the Philippines during World War II to unwillingly be thrust into the chaos of evil that will blast their worlds apart. Lawhon, McMorris, and Meissner seamlessly blend three nurses’ stories and secrets with one deft and immersive storytelling voice. When We Had Wings asks the important question–how do we know what we can become until we must become it?–and answers it with a resounding novel of suspense, courage, and grand love. Based on the true story of the first female prisoners of World War II, When We Had Wings is thrilling, riveting, and deeply felt; a do-not-miss historical fiction masterwork.” – Patti Callahan