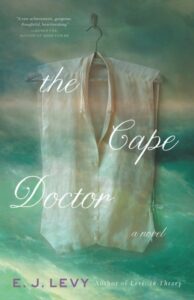 Beginning in Cork, Ireland, the novel recounts Jonathan Mirandus Perry’s journey from daughter to son in order to enter medical school and provide for family, but Perry soon embraced the newfound freedom of living life as a man. From a brilliant medical student in Edinburgh and London to eligible bachelor and quick-tempered physician in Cape Town, Dr. Perry thrived.

When he befriended the aristocratic Cape Governor, the doctor rose to the pinnacle of society, before the two were publicly accused of a homosexual affair that scandalized the colonies and nearly cost them their lives.

When we consider the differences between men and women, thinks Jonathan Perry, the remarkable doctor of E.J. Levy’s new novel, we lose sight of similarities too easily. “Once the skin is peeled back, the distinctions are few,” Dr. Perry says. “Save for the reproductive organs, one cannot tell man from woman — one cannot say This is a woman’s brain or lungs, a man’s heart. They think and beat just the same.”

What is different, the good doctor understands intimately, are the limitations and demands that society forces on women, especially in (but not limited to) the 19th century. Dr. Perry knows these restraints are drivel, because before he became Jonathan, he was Margaret, a poor Irish girl who would have been left to the streets had she not disguised herself as a man.

Inspired by the true story of Dr. James Barry, who was born Margaret Anne Bulkley in 1795 in Cork, Ireland, “The Cape Doctor” arrives as we continue to wrestle with questions about gender that should have been settled long ago. Though it’s a compelling story of one particular transformation, this wise, emotionally resonant novel makes an intelligent, heartfelt plea for compassion as it sifts through the wrongheaded assumptions we make about identity.

Author of the story collection “Love in Theory,” which won the 2021 Flannery O’Connor Award, Levy re-creates the perfect storm of patronage that allows Margaret to be educated at the hands of Gen. Fernando de Mirandus, the friend of an uncle. The general conceives the plan of turning Margaret into Jonathan — he sees something in her and knows she will excel at medicine.

And so she — he — does. Margaret becomes Jonathan with a few stumbles, then swiftly. The freedom is intoxicating, the best discovery “that greatest liberty of men: not to have to please. To be able to indulge bad temper and dislike, to feel whatever I might. Without apology, I shrugged off sweet disposition like a cloak.”

But when Dr. Perry becomes a physician in Cape Town, South Africa, he befriends the governor, Lord Somerton, and suddenly that intoxicating freedom runs up against an entirely different emotion that embroils governor and doctor in a dangerous romantic scandal.

What’s most striking about the novel is Levy’s fearless depiction of Margaret/Jonathan, her authentic rendering of this voice, her fleshing out of a little-known historical character full of complications. Dr. Perry is brave and forthright but also selfish and jealous, far from idealized. When a chance to live as a woman presents itself, how can she give up all she has earned? How can anyone bear to give up “the liberty of my own mind”?

“The Cape Doctor” is ultimately a love story, but not only in the traditional sense. It’s about loving the freedom to be your real self. “To be seen truly is the greatest gift,” Perry says. It’s a lesson we still haven’t learned.

Historical fiction from the award-winning author of Love, in Theory (2012).

During his career as a physician with the Royal Army, James Miranda Barry served at various posts throughout the British Empire. He gained renown not only for improving the health care received by soldiers, but also for demanding better living conditions for enslaved people, prisoners, lepers, and the mentally ill. When he died in 1865, it was revealed that he had female genitalia. At the time, Barry was popularly characterized as a woman masquerading as a man or as a hermaphrodite. Contemporary activists and some historians, though, have claimed him as a transgender hero, noting that he lived his entire adult life as a man and took pains to conceal his body from scrutiny upon death. The tension between these two ways of categorizing Barry illustrates why this novel became controversial before anyone had read it, when Levy described her protagonist as “a heroine for our time, for all time.” Levy points out that her work is fiction—in a move that is likely to assuage no one, she has given her character the name Jonathan Mirandus Perry—but she also insists that she “read and researched [Barry] for years,” according to The Guardian, and rejects the idea that we can retroactively apply concepts like transgender to historical figures, which will sound to some like claims of authority. Her Dr. Perry does not come to realize that he’s a man; instead Perry adopts a new name and puts on a boy’s clothes in order to get an education and lives as a man because he refuses to accept the limitations inflicted on women. Perry refuses a marriage proposal from his friend and benefactor—he learns Perry’s secret—and even hides the birth of their child in order to maintain his public persona and continue his work. The relationship between Perry and Lord Somerton takes up a substantial part of the novel; indeed, it often reads like a Regency romance written by a “literary” author. Levy uses language with care, and there are some beautiful scenes here—particularly those that show Perry discovering his vocation. Describing human dissection, he muses, “The body was not…profaned by examination, as if one were cross-examining God, but honored by attention. Love, all love, is attention.”

Artfully written but more likely to attract attention for its subject than its author’s craft. https://www.kirkusreviews.com/book-reviews/ej-levy/the-cape-doctor-levy/