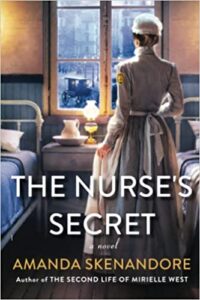 “After spending the past few weeks knee-deep in research and non-fiction reading, I was in the mood for a fastpaced, page turner this month. And my-oh-my, did I ever find one! The Nurse’s Secret is one of those books that you simply cannot put down. And Amanda Skenandore knows how to write! Using her medical experience to ground her writing, she has masterfully integrated the components of murder mystery, suspense, and romance into a spellbinding historical fiction novel. In case you couldn’t tell, I loved it!”

We have been fortunate to have had so many authors join us at our monthly book club meetings. And to my delight, the author of this month’s pick, too, zoom in. So mark your calendar to hear Amanda Skenandore discuss her inspiration behind her writing of the story.

We will be meeting on Thursday, October 27 at 7pm EDT. Please mark your calendar to join us for a most enlightening discussion. Until then, I hope you find The Nurse’s Secret as fascinating as I did.

The unflinching, spellbinding new book from the acclaimed author of The Second Life of Mirielle West. Based on the little-known story of America’s first nursing school, a young female grifter in 1880s New York evades the police by conning her way into Bellevue Hospital’s training school for nurses, while a spate of murders continues to follow her as she tries to leave the gritty streets of the city behind…

“The Nurse’s Secret” is a dark one that, if known, would never have allowed Una to get her foot past the door for a strict interview at the Bellevue school. But Una is desperate and determined. With more than a decade of surviving on the streets of late Victorian NYC behind her, Una can read people and judge how to get her way. What she needs is a place to hide after being arrested and then framed by a friend for a murder. Well, Una was about to turn the tables and frame Diedre but was beaten to the punch. No, Una is not a sweet and misunderstood waif but a hardened twenty five year old who knows all the tricks and isn’t going to hesitate to do whatever she must to survive.

An article in the newspaper gives Una the information about the nursing program and though she has no interest in actually doing this job, it will get her off the street for long enough that she hopes the coppers will have moved on. Plus she sees a whole new scamming life unfolding before her as a private duty nurse who will be welcomed into the homes of the rich. Who would suspect the saintly and hard working nurse to be the one who lifted the pearls or filched the pocket watch?