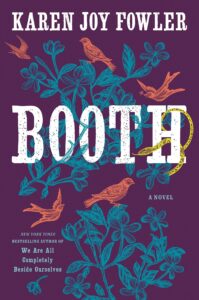 “I did not want to write a book about John Wilkes. This is a man who craved attention and has gotten too much of it; I didn’t think he deserved mine.” Karen Joy Fowler

This month’s pick is technically about John Wilkes Booth, but it really isn’t. It’s about his family and the tragic tale of their lives.

Booth’s father is a famous actor, and an unstable alcoholic. His mother is paralyzed by grief. A number of his brothers also become actors. And his sisters view their future and the world with trepidation. In Booth, we follow the family through their folly and failures and see the world in the mid 19th century through their eyes..

Be forewarned: this is a long book and does drag a bit. But I found the tragic story of this dysfunctional family worth it.

Please note that this month, we are back to our normal meeting schedule.

We will be meeting on Thursday, September 22 at 7pm EDT. Please mark your calendar to join us for a most enlightening discussion. Until then, I hope you find Booth as fascinating as I did.

Given his upbringing in a vegetarian, strongly anti-slavery, highly literate, freethinking household that even today would be labeled bohemian, how did John became a pro-slavery, pro-secessionist fanatic capable of terrorist murder? And how did his actions affect his surviving family? Alcoholic, eccentrically idealistic Junius Booth is a major star on the British stage when he and his “wife,” Mary, run away to rural Maryland while he is still married to another woman. Of their 10 offspring, six survive past early childhood. Bright oldest daughter Rosalie dotes on charming Johnny but is keenly perceptive about his weaknesses. (In a heartbreaking depiction of Victorian women’s limited options, Rosalie’s own sparkle fades into genteel alcoholism after she’s forced to forego education and marriage and become the family caregiver.) Brother Edwin is quiet, responsible, maybe even dull compared to charismatic John, but despite sharing the family addiction to alcohol, Edwin has the discipline, intelligence, and talent that John lacks to succeed as an actor. To his own—and John’s resentful—surprise, Edwin becomes America’s foremost actor, maintaining his prestige despite his brother’s infamy. Staunchly abolitionist and pro-union, Edwin, who once saved Robert Lincoln’s life, and Rosalie are increasingly aghast at John’s increasingly crazed behavior and racist ravings. More conflicted is sister Asia, who shares John’s charm as well as his prickly disposition; after the assassination, she finds herself briefly under suspicion. As the Booths’ story unfolds, Fowler inserts major national events into the narrative, like the Dred Scott case and John Brown’s uprising, along with key moments in Lincoln’s life showing his humanity as well as his public nobility. The historical context she offers is of a pre–Civil War America of deep moral divides, political differences tearing close families apart, populism and fanaticism run amok.

The similarities to today are riveting and chilling.

Karen Joy Fowler, best known for her very different novels “The Jane Austen Book Club” and “We Are All Completely Beside Ourselves,” goes in yet another direction with “Booth,” and it’s reasonable to wonder why. If a heinous act hadn’t been committed by one member of their family, the Booths would have been properly relegated to the history of American theater, where father Junius and sons June, Edwin and, yes, John Wilkes, each made their distinctive marks.

John’s of course we know, and though his assassination of Abraham Lincoln comes to define the lives Fowler limns, he is the least of the Booths in this book — by design, as Fowler tells us in her author’s note. “How to write the book without centering John Wilkes” was, she says, “something I grappled with on nearly every page.”

What we have, then, is an interesting historical novel about a family in 19th-century America, whose story begins in theatrical celebrity and ends in notoriety, broken by the Civil War and the irreconcilable convictions it exposed and the bloody passions they unleashed. The war itself is adumbrated mostly as it affects the Booths — for instance, when the Manhattan draft riots of 1863 spill into their neighborhood (and they have to hide a wounded Union soldier and his Black attendant) or John rushes off with the hastily assembled Richmond Grays to confront an imaginary force of abolitionists marching to the rescue of the jailed John Brown.