The History Before the Era of Good Feelings 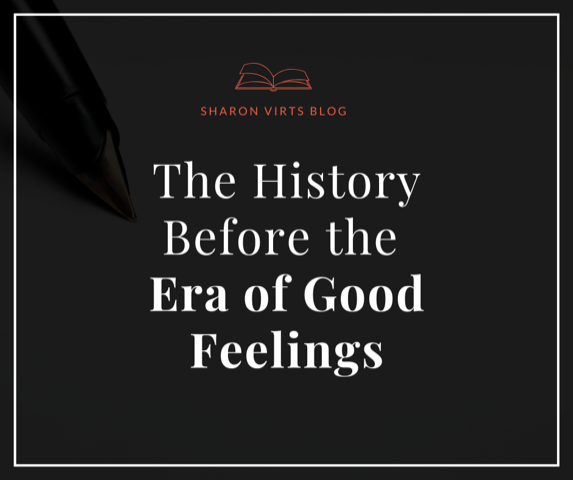 Except for an opening scene, Masque of Honor is set in Virginia between 1816 and 1819. This period in American history is known as the Era of Good Feelings (~1817-1825) and was dominated by one political party, Thomas Jefferson’s Democratic Republicans.

But Masque of Honor is about the Mason-McCarty duel that was fought as a result of a political conflict between the two, right? But if there was only one political party, then what was the conflict?

Until I researched the answer to this question, I was unable to put Masque of Honor’s story into context. To find the answer that question, I had to reach back to 1794, more than twenty years prior to the duel—an entire year before my protagonist Jack McCarty was born. It was the Jay Treaty that served as the lightning rod of political differences between the Democratic Republicans and the Federalists that influenced the thinking (and conflict) of Armistead Mason and Jack McCarty.

After the American Revolutionary War ended and the signing of the Treaty of Paris, numerous issues remained unresolved between the United States and Great Britain.  American exports were still blocked by British trade rules and tariff restrictions, yet British imports were flooding American markets. British troops still occupied forts in the Great Lakes area, leaving settlers in that region vulnerable to attacks by Native tribes. The British Royal Navy captured nearly 250 American merchant ships carrying goods from French colonies in the West Indies and forced American sailors into service of the British Navy to fight in Britain’s war against France. The final straw came when the British sold rifles and other weapons to Indian tribes near the Canadian-American border, encouraging the Indians to disregard the border and impart violence on frontiersmen and settlers.

The American public was outraged. Both Congress and the Administration were bitterly divided on how to respond. The then-Secretary-of-State, Thomas Jefferson, argued that America declare war on Great Britain. In Congress, James Madison took a more tempered stance, calling for a trade embargo against the British. Jefferson, Madison and their supporters liked neither the political or economic system of England. Their European favorite was France, despite that country’s revolutionary excesses.

Political leaders centered in the Northeast were much more sensitive to trade issues than were Jeffersonians centered in the South. These “Federalists” opposed the belligerent proposals made by Jefferson and his allies, fearing that such action would be tantamount to national and economic disaster. Treasury Secretary, Alexander Hamilton, argued for negotiations as he believed amicable relations with the British were strategically important for America’s long-term viability. President George Washington agreed with Hamilton and sent the Chief Justice of the Supreme Court John Jay to negotiate a treaty with Great Britain.

After eight months, negotiations ended with John Jay winning only two concessions. The British agreed to vacate the forts in the northern United States territories and agreed to grant the United States “most favored nation” trading status. Other issues to include British seizures of American ships, were left to be decided later through an undefined, indefinite arbitration process.  Jay was forced to concede that Britain could continue to seize U.S. goods headed for France on American ships if they paid for them and could seize French goods transported on American ships without payment. Most significantly, Jay failed in his attempt to negotiate an end to Britain’s impressment of American sailors into the Royal Navy, a key issue that led to the War of 1812.

Now here is where things got really interesting.

Once the treaty arrived in America (remember, communications came to the United States by ship), President Washington kept the contents of the treaty SECRET FOR MONTHS until the Senate reconvened a Special Session in Philadelphia to discuss it.

The Senate debated the treaty in SECRET SESSION on June 8, 1795. It deliberated under a cloak of silence for more than two weeks. After heated discussions in unseasonably hot weather, the Senate approved the treaty by a vote of 20-10. The Senate, too, wanted the treaty kept secret from the public until Washington signed it, letting the President take the heat from the public for adopting it. And by then, it would be too late for the public to have any input into its contents.

Virginia senator, Stevens Thomson Mason (Armistead Mason’s father) refused to abide by any pledges to keep the treaty secret and leaked the document to Benjamin Franklin Bache, a Philadelphia newspaper editor, who printed the treaty in full on June 30, 1795. Printed within the pamphlet was a letter from Mason to Bache:

“I have seen in your paper of this date an abstract of the late Treaty between the United States and Great Britain, which tho’ not perfectly correct is nearly so. As this publication will probably excite a newspaper discussion, it is of importance that the People should possess a full and accurate knowledge of the subject to which their attention may be drawn, and which I think has already been improperly withheld from them. Lest therefore the Treaty should be presumed more favourable, or represented to be less so than it really is, I send you herewith a genuine copy … for the purpose of giving to the citizens of America full information respecting this momentous business.”

Following the distribution of the publication, an outraged population reacted to the treaty. Riots and public bonfires of the British flag, the treaty, and effigies of Jay took place. Newspapers published scathing editorials. City and county residents sent their opinions to President Washington. President Washington described reactions to the treaty as being similar to “that against a mad-dog; . . . everyone. . .seems engaged in running it down.”

Thomas Jefferson, a close friend of Mason, supported (and most likely encouraged) the Senator’s action. Relations between Washington and Jefferson, already strained, deteriorated further. Ultimately, Washington’s friendship with Jefferson would not survive.

And so twenty some years later, the tensions between Federalists and Republicans in Virginia continued. Armistead Mason assumed his father’s liberal politics, leveraged his father’s position and status, and became a leader in the Democratic Republican party. Jack McCarty, a blood relative of George Washington, was a staunch conservative and deeply steeped in Federalist activities. Even though the Federalist party had lost national support by 1817 (more on that in another blog post) and the fact President James Monroe (a Democratic Republican) lived just outside of Leesburg Virginia, allegiance to the Federalist party in Loudoun County remained strong until the formation of the Whig party in the mid-1820s.

While the Jay Treaty itself was not a direct cause for the duel between Mason and McCarty, its politics deepened the divide between the founding fathers that Mason and McCarty admired most. And like their fathers, Armistead and Jack shared their fathers’ passions – their attitude toward the British, their positions on economic and trade policies, their opinions on military conscription, and their leverage of the press to influence public opinion and attack their enemies.