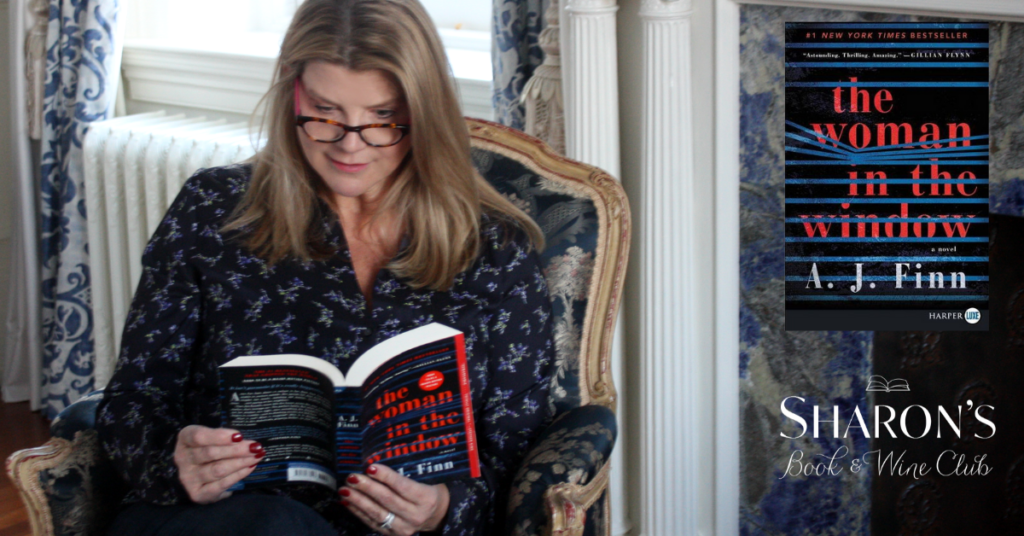 The Woman in the Window by A.J. Finn

Anna Fox lives alone—a recluse in her New York City home, unable to venture outside. She spends her day drinking wine (maybe too much), watching old movies, recalling happier times . . . and spying on her neighbors.

Then the Russells move into the house across the way: a father, a mother, their teenage son. The perfect family. But when Anna, gazing out her window one night, sees something she shouldn’t, her world begins to crumble—and its shocking secrets are laid bare.

What is real? What is imagined? Who is in danger? Who is in control? In this diabolically gripping thriller, no one—and nothing—is what it seems.

Wine Selections for this month include:

For this month’s book club, I selected The Woman in the Window by A. J. Finn, a pseudonym for Daniel Mallory, a debut novelist and editor at Marrow Publishing. Although it is a 2018 release, I wanted to share it with you before the movie release later this year.

Why I chose this book? The Woman in the Window is the story of Anna Fox, a child psychologist suffering from Agoraphobia (fear of open spaces). I wanted a fast paced story (the story happens over the course of a two week period) as counterbalance to Ann Patchett’s slower paced novel from last month (that story transpired over five decades!). This novel, too, received glowing reviews and it fit well within my research for my current writing project, where the truth is obscured by the fog of psychosis. And the novel was recommended by my literary coach. While not a historical fiction (we’ll get back to those next month), I couldn’t put this book down (I read it in a single day!). And those are the kinds of books I want to share with you.

An agoraphobic recluse languishes in her New York City home, drinking wine and spying on her neighbors, before witnessing a terrible crime through her window that exposes her secrets and raises questions about her perceptions of reality.

Listen to NPR interview with the author!

Better late the never I say. Yes I just recently read one of the best selling suspense books of 2018. It was worth the wait. I have heard a lot of mixed reviews but I really enjoyed this book. There were a few predictable ‘scares’ but all in all, I enjoyed the building suspense and chaos filled climax. As a lot of the books I review this was the author’s debut novel. With so many talented writers coming out the next few years seem to be a reader’s paradise!!!!

We are introduced to the novel by the narrator who we learn is looking out her window and spying on her neighbours. She is watching the wife have an affair with the handyman in one house and a kid playing a cello in another house. The narrator (Anna Fox) talks about Ed and Olivia who seems to have left her. Anna has agoraphobia from some episode which is pinnacle in the backstory of this novel. The reader learns that before she was stuck in her house Anna was a prominent child psychologist. Now she helps out fellow agoraphobic people on a website.

The Woman in the Window’ Nods to Classics Old and New, From Hitchcock to ‘The Girl on the Train

The rocket fuel propelling “The Woman in the Window,” the first stratosphere-ready mystery of 2018, is expertise. Its author is billed as A. J. Finn, perhaps to leave open the possibility in readers’ minds that this entry in the “Gone Girl”/”The Girl on the Train” sweepstakes was written by a woman, as most have been.

But its author is Dan Mallory, a longtime editor of mystery fiction. He is well versed in the tricks of the trade; he credits James Patterson as a helpful influence, particularly when it comes to short chapters. Mallory has edited recent “Agatha Christie” novels, but Christie never wrote an action scene packed with special effects just right for the movie version.

Mallory also clearly knows a lot about the more diabolical elements in Hitchcock movies. And he hasn’t been shy, as Finn, about plugging them into his plot. “The Woman in the Window” starts out with a “Rear Window” setup: Anna Fox spies on her neighbors, looking from her gentrified Harlem townhouse into theirs. She is housebound (agoraphobia) but thinks she witnesses a crime. And now for a dose of “The Girl on the Train”: Anna is a whopping drunk who also takes many prescription drugs, none of which should be mixed with alcohol. Dear other books with unreliable narrators: This one will see you and raise you.

Read More from the NY Times