Christmas in the Early 19th Century 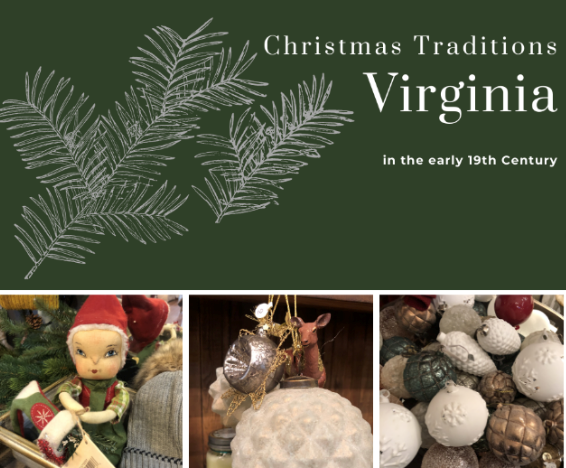 As I wrote Masque of Honor, I wanted to include a scene to recreate Christmas in the early in 19th century. Christmas as we know it today dates to the later half of the 19th century. But how did Virginians celebrate Christmas in 1817? To figure that out, I had to do more than a little research! Americans in different parts of the country were from different national origins and they celebrated (or didn’t celebrate) the holiday in ways from the Old World. Puritans in New England, for instance, attempted to ignore Christmas because the Bible was silent on the topic. The Dutch settlers of New York considered St. Nicholas to be their patron saint and practiced a yearly ritual of hanging stockings to receive presents on St. Nicholas Eve, in early December.  Virginia planters took the occasion to feast, dance, gamble, hunt and visit, perpetuating what they believed to be the old Christmas customs in English manors. (Are you surprised?!)

What was common, however, was decorating with green boughs on Christmas Eve. Garlands of holly, ivy, mountain laurel, and mistletoe were hung from roofs, the walls, and pillars. Lavender, rose petals, and pungent herbs such as rosemary and bay were scattered throughout one or two of the main rooms, providing a pleasant holiday scent. Scented flowers and herbs were chosen partially because they were aromatic and thus were considered an alternative form of incense. In Loudoun County, the German Settlement in the west brought glass balls and beads that were used on the boughs that were brought inside. In my mind’s eye, I imagined the aristocracy to have adopted some of those traditions in the decoration of their homes. A little creative license as I recreated Christmas in the early 19th century.