Sojourner Truth: Truth is Powerful, and it Prevails 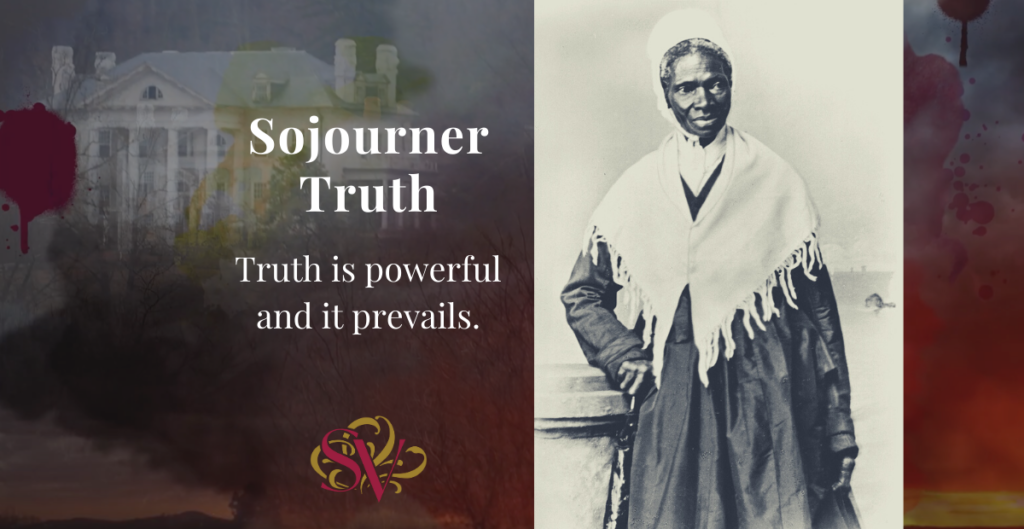 Born in New York in 1797, Isabella Baumfree had been bought and sold four times, suffered countless humiliations, and unspeakable pain. By the time she was 29 years old, she had given birth to five children, her first born died in childhood and one son was illegally sold into slavery. She was able to escape with her last child, an infant daughter, and agonized about leaving the remaining children behind as they were not freed until they were well into their twenties. Isabella was a tall woman and her height was matched only by the depth of her character. Though functionally illiterate, this woman became a force of change in the abolitionist, civil rights, and temperance movement.

As a young woman, Isabella worked for a local minister. So moved by the Spirit, Isabella renamed herself Sojourner Truth as a testament to her Faith. Forged by hardship, endurance and perseverance, she became a charismatic speaker who captivated audiences. During her time as a preacher, Sojourner met abolitionists William Lloyd Garrison and Frederick Douglass and was persuaded to narrate what was to become her autobiography, The Narrative of Sojourner Truth. She survived on the royalties of her book and her notoriety brought her to the attention of Elizabeth Cady Stanton and Susan B. Anthony whose cause she quickly adopted as her own.

On a lecture tour in 1851, she delivered one of her most famous speeches, “Ain’t I A Woman?” in which she challenged the prevailing beliefs of racial and gender inequality. As a result of her increased involvement in women’s suffrage, she parted ways with Frederick Douglass who believed suffrage for enslaved men should precede women’s rights.

During the Civil War, she remained a strong supporter of President Lincoln, urging free black men to enlist and fight for the Union. She organized supplies and remained a source of boots-on-the-ground strength to the men ravaged by the fight. Her efforts gained her audience with President Lincoln, and after the war she remained an advocate of black veterans, helping former soldiers and freed slaves find jobs through the Freedmen’s Bureau in Washington, D.C.

Ultimately she was reunited with three of her daughters. She remained an activist until the end of her life, when nearly blind and deaf, she remained involved in the causes that advanced the rights and standing of African Americans.