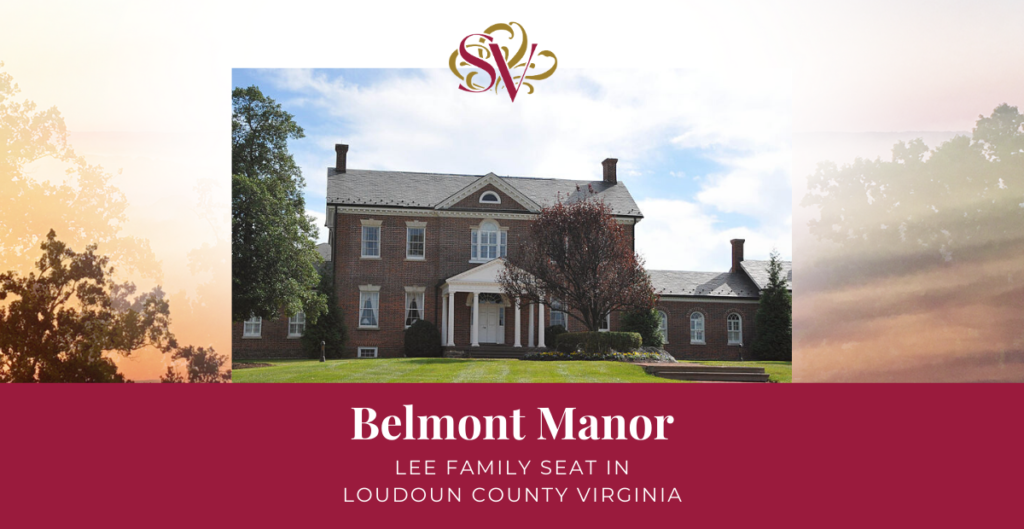 Loudoun County Virginia’s countryside was once dotted with the plantation homes of some of the most influential families in American history.  If the house had a proper name attached, you could bet it belonged to someone of note, or a direct descendant.  An example is the first house on our Masque of Honor historical home tour, Belmont Manor (formally known as Belmont Plantation). The house has led several lives, as most old houses do, and is currently the clubhouse of an exclusive golf resort, but its pedigree is a storied one.

Built between 1799–1802 by Ludwell Lee oldest son of Richard Henry Lee, a founding father from Virginia. Belmont Plantation was sold in 1836 at Ludwell’s death to Margaret Mercer who converted it to a school for girls. Belmont was later bought by then-Kansas governor Frederick Staunton who sold it in 1907 to Pittsburgh attorney John Scott Ferguson, who undertook a few renovations.

In 1915, Ferguson sold the property to Edward B. McLean, son of the publisher of the Washington Post. Mr. McLean built a thoroughbred horse stable and trained horses on the property until 1931.  Incidentally, the McLean family was also one of the owners of The Hope Diamond, a fascinating story for another time.

Patrick J. Hurley, Secretary of War under President Herbert Hoover, bought Belmont from McLean and owned it until the early 60s when it was sold to IBM and used as their management retreat center.  IBM moved out in the early 80s, and sadly the house fell into dire disrepair and neglect.  It was eventually purchased by developers Toll Brothers, who restored and renovated the manor house, making it the crown jewel of the residential development they built around it.

The renovations undertaken by Toll Brothers were thoughtfully executed, maintaining the character and architectural style of the original home.  The main entrance includes a portico with two Doric columns on either side. The first floor consists of a large center hall, and the foyer, which is straddled by two large reception rooms, each with mantels that are said to be gifts from General Lafayette, of Revolutionary War fame, are decorated with paneled wainscoting.  This is very typical of the style of Southern mansions of that time.

The only outbuilding of the Manor house that is still standing today is a small, stone smokehouse. The cemetery is on the west side of the manor and holds the grave of Ludwell Lee who died in the house in 1836, though it is disputed as to whether he is actually interred there. He also has a gravestone at Saint James Episcopal Cemetery in Leesburg, VA.

Next week, we’ll look a little closer at the Ludwell Lee and his legacy.