19th Century Culture: The Irish in the Antebellum & Their Impact on American Culture 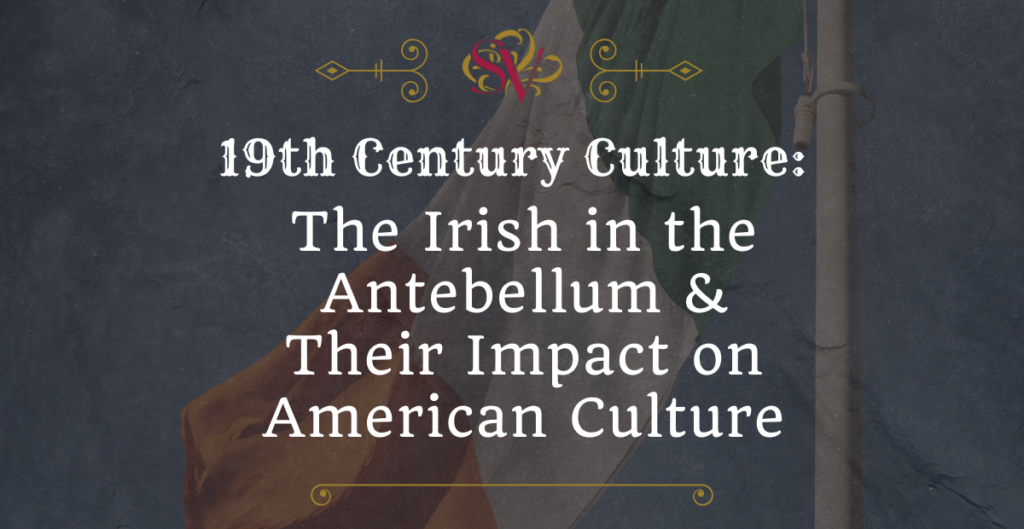 Our country has persistently been a symbol of freedom and hope for those seeking refuge—from its birth, to the present day, and especially so in the 1800s. The newly prosperous America was seen as the land of opportunity, attracting immigrants from around the world. From the beginning of the century, an overwhelming majority of these immigrants were from Ireland. At one time in the 19th century, the Irish represented nearly half of the immigrant population in the United States.

Irish immigrants had been settling in the U.S. since the 1780’s and had assimilated easily due to shared language and their needed skills. Because most of the Irish were Catholic, their arrival, however, exacerbated an already existing conflict with Protestants. Many Americans feared that the religious freedom they had sought in coming to the new land would be compromised and that somehow, this infusion of Catholicism would impose Vatican law into the fledgling nation. As a result, the new Irish immigrants were automatically seen as a threat, and the relationship between them and the American people was fraught with prejudice and violence.

In the 1840s, Ireland underwent a deathly famine brought on by a plant eating blight that destroyed the potato crop and was further exasperated by the British government, who exported what little viable harvest there was to Great Britain, leaving the Irish people to starve. The famine, the resulting poverty, and unrelenting British rule spurred the Irish to flee across the Atlantic in search of a better life and a chance to survive. It is estimated that two million refugees arrived to the United States during the Great Famine of Ireland.

Upon arrival, the Irish predominated three locations: New York, Chicago, and Boston. As they settled onto their new land they took up menial, often dangerous jobs – digging trenches for water, working in textile mills, or cleaning houses and stables. They received minimal payment for their work, and continued to face discrimination, even in the job market. Newspapers published ads discouraging those of Irish descent to apply, and often featured distasteful illustrations depicting Irish people to display their hatred.

In spite of the discrimination and abuse, Irish Americans yielded an immense positive outcome for America as a whole. Still a relatively new country, America benefited from the growing workforce, especially in the area of construction. Railways, buildings, and systems built in this time period helped to propel America into the modern world. Additionally, the Irish greatly influenced the development of worker’s unions in America with figures such as Terence Vincent Powderly, Mary Harris, and the Mollie Maguires, who fought to improve working conditions and trade unions in this country.

Today, we celebrate Irish Americans and their historical contributions to our nation. In many ways the Irish culture is still prominent in our country, particularly on the East Coast where a large percentage of the Irish-descended population still live to this day. Irish traditions such as St. Patrick’s Day are so ingrained in our American culture that oftentimes we barely stop to think about their history and how it is that we celebrate and participate in them today.