The Rise of Mass Entertainment: Leisure Time and Fun in Pre-Civil War America 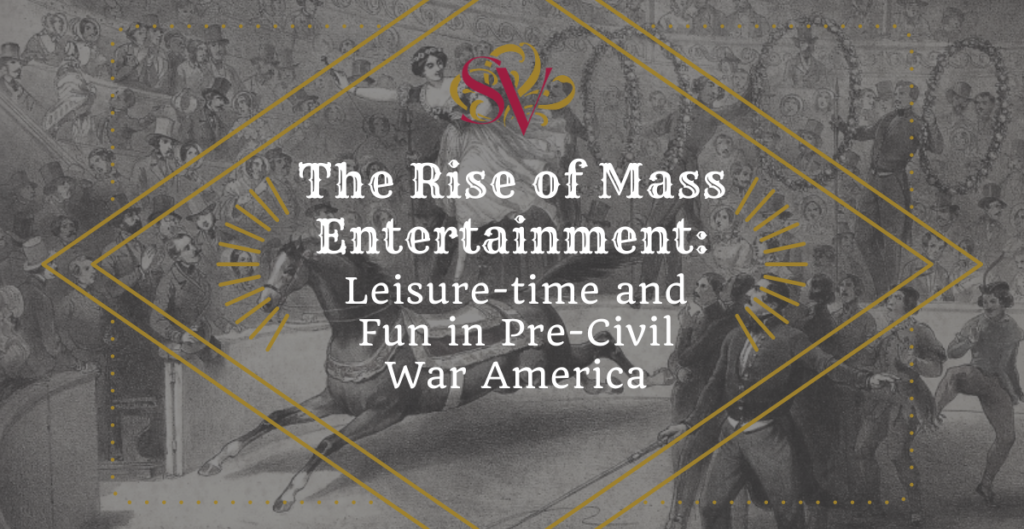 In a time of growth and territorial expansion, early 19th Century America saw many changes occur in day-to-day life. Advancements in technology brought a new wave of industrialization, and the population grew exponentially. Due to an economic boom, the American people were living more comfortably and in better conditions. Whereas before only the wealthy could afford to attend art exhibits, music and theatrical performances, with more leisure-time on their hands and money in their pockets, the middle class, also desired access to affordable entertainment.

Part of this demand was met by theater. Previously theater was performed in a few exclusive locations around the country. As the transportation system expanded, performers were able to travel cross-country. Likewise, technological advances such as the telegraph allowed for entertainers to promote their acts and reach wider audiences. Advancements in electricity replaced candlelight with stage lights, and the introduction of ventilation and comfortable seating improved theater interiors, giving the overall experience a grander feel. Though the interiors were more polished, the theatrical experience was quite different from today with audiences expressing their opinions of the performance during shows by throwing objects and heckling. As a result, crowds often became unruly.

With the increased use of electricity came the development of another form of entertainment: the amusement park. What started as public picnic grounds for working men to enjoy leisure time with their families eventually grew to become more elaborate affairs. First came entertainment and affordable food, and then attractions and spectacles were incorporated on the grounds. One of the oldest running amusement parks in the country is Lake Compounce. When it opened in 1846, a scientist performed an experiment that drew crowds. Early features of the park included lakeside band concerts, rides, as well as swimming and boating on the lake.

Though the circus had been established in the United States in the 1700s, excitement spread when Circus of Pepin & Breschard toured the East Coast in the early 1800s. Astonishing stunts were performed, and as time went on the stunts became more elaborate. Exotic animals were showcased and trained to perform tricks that dazzled audiences of all ages.

Theater, amusement parks, and the circus were not all 19th Century entertainment had to offer. There were social clubs, museums, concerts and even “toy theatre”, which we know today as puppetry. All served as important American past-times of daily life in the 19th century and, in many instances, are still part of our culture and keep us amused and entertained today.