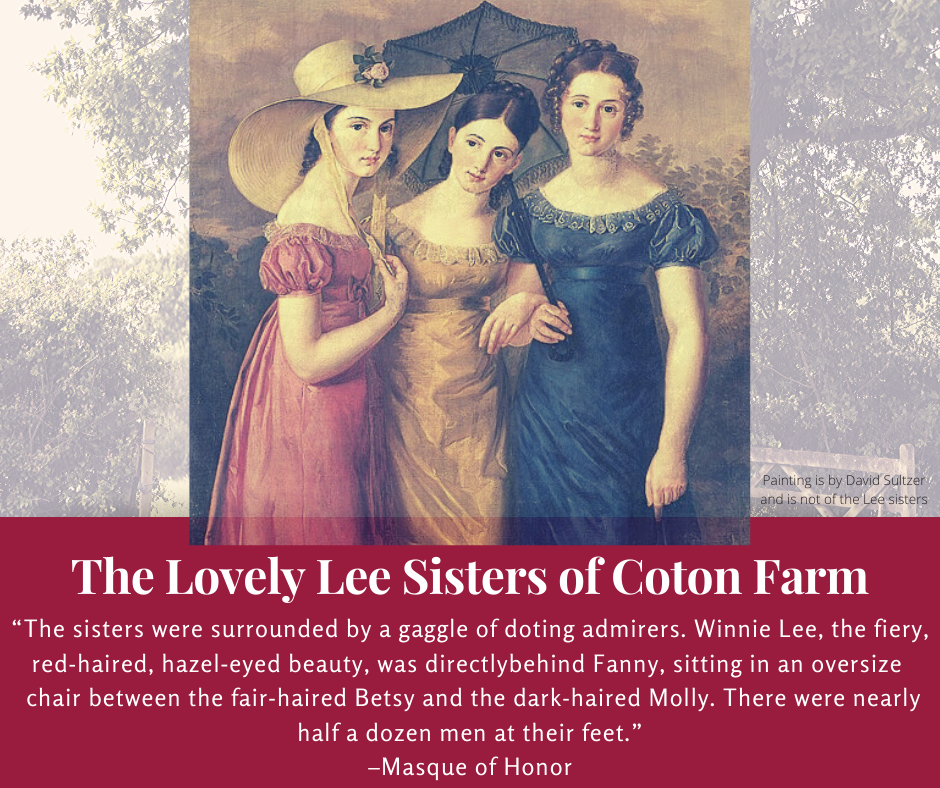 “The sisters were surrounded by a gaggle of doting admirers. Winnie Lee, the fiery, red-haired, hazel eyed beauty, was directly behind Fanny, sitting in an oversized chair between the fair-haired Betsy and the dark-haired Molly. There were nearly half a dozen men at their feet.” –Masque of Honor

There are various accounts of just how many daughters Thomas Ludwell Lee II and Fannie Carter Lee had when Fannie was left a widow at age 36. Her granddaughter Sally McCarty Pleasants mentioned eleven in her memoir although she may be confusing her “Lee” grandmother with her “McCarty” grandmother, who did indeed have eleven children. There are other accounts that Fannie Carter Lee had eight daughters when her husband died. Through my research, I identified seven daughters living in the time period of my novel (1816-1819). And like their mother, the girls were not women to be easily ignored.

“As the girls grew up, each one in turn had a season in Washington. My mother and Aunt Fanny were formally introduced into society by Mrs. Dolly Madison, at one of her own levees as ‘specimens of Virginia ladies’.” [Excerpt from Old Virginia Days and Ways]

Having lost their father and much of their dowry to repay his debts, the sisters’ choices for marriage were more constrained than many others of the Lee dynasty. One sister married her first cousin (which at the time wasn’t unusual) and two others married widowers or men much older than themselves. But the fact remained that the sisters were beautiful and charming with dreams that, because of a woman’s position in society, limited their ability to pursue their ambitions.

Winifred Beale (1790-1833), “Winnie” the fiery red-head, married her cousin, Landon St. Leger Carter, and although they had no children, his endowment of cash to five of the nine children of one of his slaves implies that he may have been their biological father.

Mary Aylett (1786-1826) “Molly”, a raven haired beauty, married Tench Ringgold, a widower and close friend of James Madison. In fact, Tench Ringgold, the owner of a successful rope manufacturing business, was with President Madison throughout his escape from Washington before the British burned the White House and Capitol in August 1814.

Elizabeth Ludwell (1787-1837 ) “Betsy” was fair-haired and blue-eyed. She married William Brent, a planter/politician and known slave-trader.

Frances Carter (1796-1750) “Fanny”, was an attractive brunette with doe-brown eyes. Records indicate that she died unmarried, living with her sister Lucinda until her death.

Ann Lucinda (1798-1854) “Lucy” was a sassy blonde who married John Mason “Jack” McCarty (the protagonist in my novel Masque of Honor). She was a talented singer and had dreams of becoming a star on the stages of Philadelphia, New York and London. After her marriage to Jack in 1820, she moved to Strawberry Plain where the couple had three children. She lost her oldest son “Jackie” to cholera in 1831 and the second son, James, in a hunting accident in 1837. In 1838-39 timeframe, Lucinda, Jack and their young daughter Sallie, moved to their newly built horse farm/plantation “Riverlea” on 1200 acres bounded by the Broad Run and Potomac River (near today’s Broad Run Farms). In 1850, they moved to Alexandria and spent their last years traveling.

The trajectory of these women’s lives were only measured in terms of the men they married. Had Sallie McCarty Pleasants not left her memoir, there would be little trace of these sisters. Unfortunately, we can only guess the impact they, and other women like them, had on our emerging nation through the lives and work of their husbands and sons.