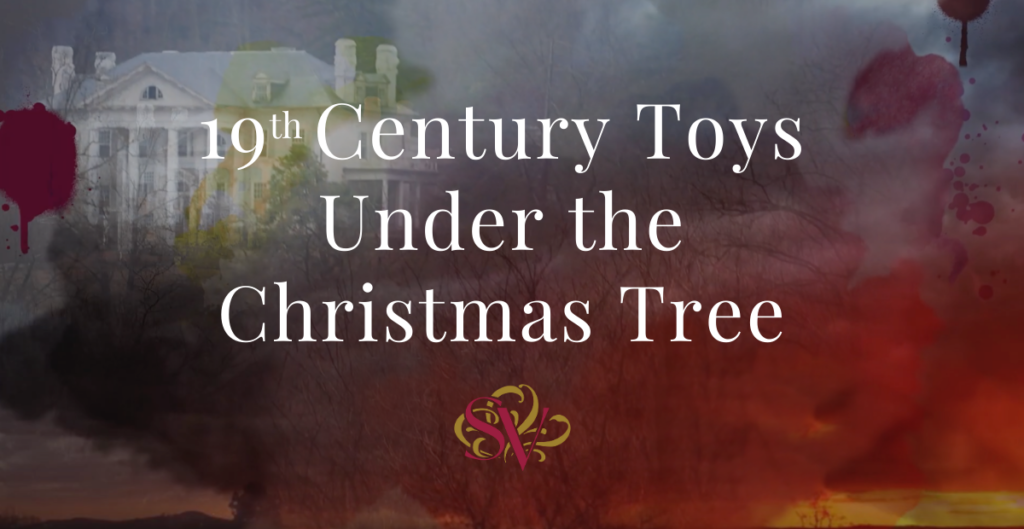 What kinds of toys were under your tree Christmas morning? Did you spend hours dreaming about that perfect pair of roller skates or a Barbie Dreamhouse? All of the research I’ve done for Masque of Honor has fueled literally a thousand questions and curiosities about then vs. now. And regardless of when you were born, it is probably safe to assume that the toys of your childhood were lightyears away from what was under a 19th century Christmas tree.

We know that life was much more challenging for folks in the 1800s. Middleclass Americans often had to include their children in the workforce from a very early age, the need to sustain the family and keep bread on the table far outweighed the notion that kids needed a chance to simply be kids.

When the opportunity arose for kids to be kids, they would often make their own toys.  There were some basic “regulation” toys available of course, like marbles and balls, but on the whole, children would make their own rag dolls, carve bows and arrows, wagons, and slingshots.

In the 1800s, it was also widely accepted that children benefit from learning how to sew and construct their own toys. It was seen as a training for a future vocation. Naturally, gender norms were strictly enforced, with the understanding that boys would learn to build, and girls would learn the art of sewing and dressmaking while they “played.”

It wasn’t until after the Civil War, when the increased industrialization of the United States began to include toys in mass production, that it was more common for children to have store-bought toys rather than those made at home; though they were prohibitively expensive for all but the wealthier class.

It isn’t surprising then that when you visit museums there aren’t many examples of these well-loved treasures available.  If kids made them, they played with them until they were so well-loved, they were in rags and tatters.

I don’t quite know if the toys of today have this kind of longevity … and maybe not as much emotional attachment either. Though every once in a while, there is a teddy bear whose fur is gone in all the loved places, so maybe some things are truly eternal.