Breathe In, Breathe Out: The Invention of the Stethoscope 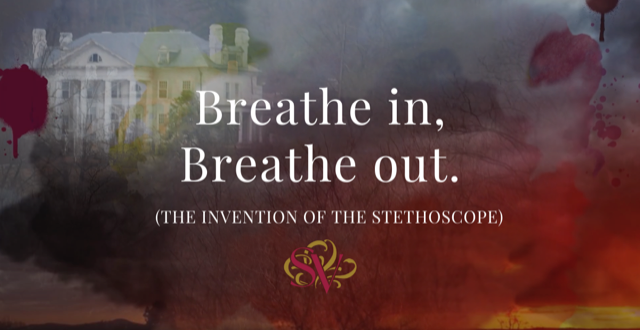 In the 19th century malaria was extremely common in the United
States; at its height, more than one million cases were reported, this is
probably a conservative number since not everyone had access to a medical
treatment.

In Masque of Honor,
Armistead Mason bemoans the almost “ordinariness” of suffering from malaria
while in battle.  A lot of the research I
did while writing Masque uncovered fascinating history about subject
matter I had never previously considered. For example: how would you have
diagnosed ANY breathing ailment prior to the invention of the stethoscope? As
it turns out, the story of its invention is a fascinating one.

It has been over 200 years since the invention of the
stethoscope, and thank goodness because prior to that, there were no non-lethal
ways to explore what was going on inside the human body. Let’s think about that
for a minute:  the only way to find out
what had gone wrong with a patient’s health was to wait for the illness to run
its course and for the patient to die.

Thankfully for all of us, this was not acceptable to French
doctor Rene Theophile Hyacinthe Laënnec (1781 – 1826).  While treating children at Necker Enfants Malades Hospital in Paris, he observed
two children sending signals to
each other using a long piece of wood and a pin. With an ear to one end, the
child received an amplified sound of the pin scratching the wood.  Eureka!
This revelation provided the solution to the problem he’d been
having  with his female patients: he
needed to listen to a patient’s breathing but also needed to keep a
respectable distance from a woman’s chest.
The first stethoscope he designed was simply a paper tube, practically a
rolled piece of paper, that when put to his ear would allow him to hear a
patient’s heartbeat and breathing.  As
validation, his diagnoses were later confirmed by autopsies. (Hopefully not
of the patient he was treating!)

Doctor Laënnec spent three years testing various types of
materials to make tubes, perfecting his design and listening to the chest
findings of patients with pneumonia. The first stethoscope that resembles the
one we know today had a wooden tube. Rubber tubing came later, but later
designs have remained basically true to the original.

According to medical historians, the invention of this still
pivotal piece of medical equipment marked a major change in how disease was
diagnosed:  from being a bundle of
symptoms that had to be VISIBLE, to understanding that disease actually existed
even when you couldn’t see any of the symptoms.

This cold and flu season think about Dr. Laënnec if you
find yourself in a doctor’s office.  It
is because of him that we don’t have to wonder what is going on in our own
bodies.