Rack ’em up! – The History of Billiards 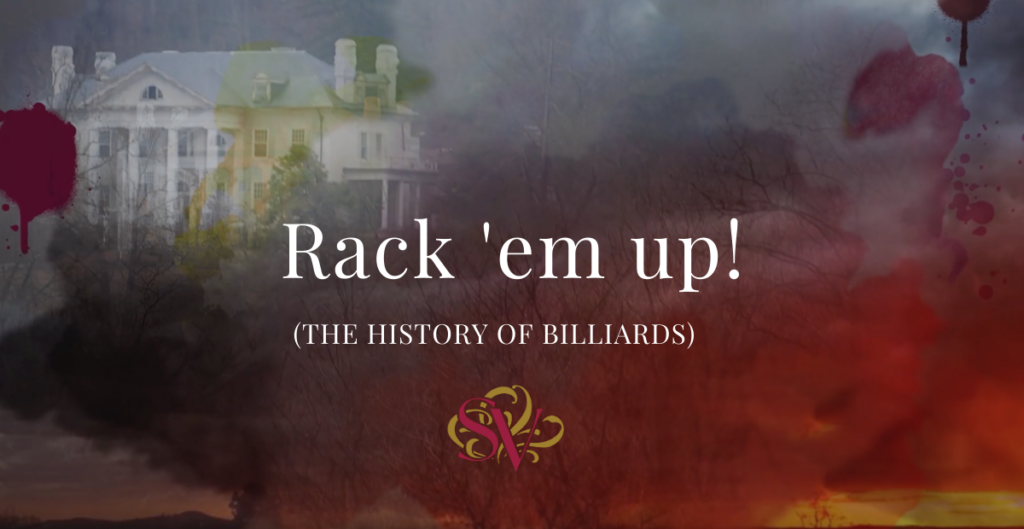 “The winter solstice was the shortest day of the year, but already it felt like the longest.  Armistead sent the cue ball flying, breaking the neatly racked balls across the green felt of the table. He had hoped that billiards would distract him. He was wrong.”  –Masque of Honor

Fast Eddie Felson (who had the good fortune to be portrayed by Paul Newman in The Hustler) brought billiards out of the backrooms and to the big screen in the early 60s with some serious style, but the billiard table has been the “downlow” center of business and politics and good old fashioned competition since the 1600s.

The exact date in which billiards became an American pastime worthy of its own establishments is debatable.  It is commonly thought that it was brought over by the Dutch and the English, and by the mid 1700s, even George Washington was thought to have been a fan. In Masque of Honor, Armistead Mason uses his billiard table as a place to clear his head. The distraction of the game, even when played alone, was a way to relax and (not entirely by accident) carve a space away from the “women folk.”

Interestingly, the word we now associate with billiards or today referred to as pool, originally had nothing to do with the actual game. The word “pool” means a collective bet, and in the 19th century, a poolroom was a betting parlor for horse racing. Pool tables were installed so gentlemen who were betting could pass the time between races. As you may imagine, poolrooms were not a place where the reputable wanted to be seen, and at the time, absolutely forbidden for women.

Michael Phelan is the agreed upon father of the game in America. An Irishman who emigrated to the United states in 1850, he wrote the first book explaining the rules of the game. He was a tireless promoter of billiards and his company, along with its chief competitor, J.M. Brunswick & Balke, controlled all aspects of the game until the 1950’s. Changes have come about since then, but the basic premise remains in this game whose objective sometimes far outweighs getting the ball in the corner pocket.

So, if you have a pool table in your home, or enjoy a good game at the pub, you are engaging in a centuries old tradition of letting off steam.  Thank Mr. Phelan for his visionary dedication and “Rack ‘em up!”