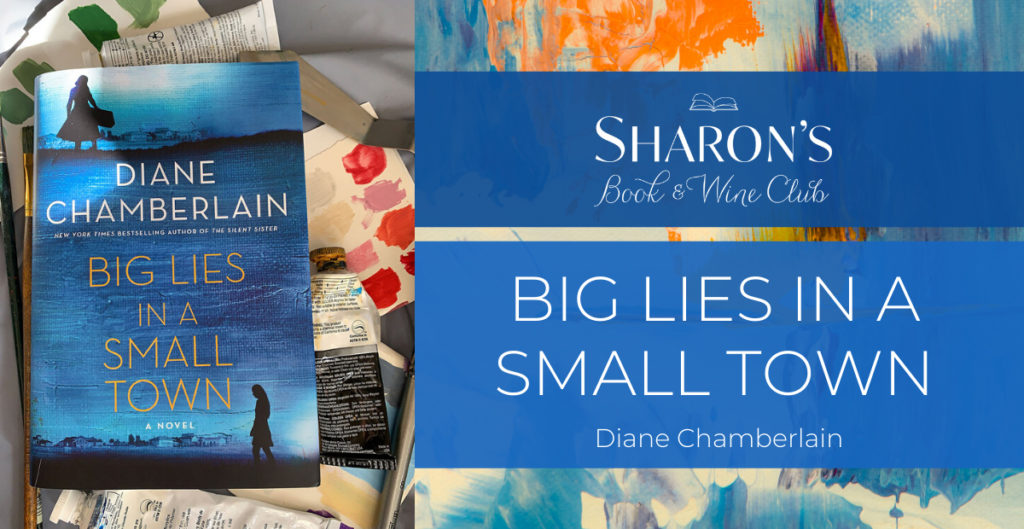 For this month’s book club, I selected Big Lies in a Small Town, by Diane Chamberlain. After the seriousness of last month’s pick, I wanted a lighter story for April.

Why I chose this book? I was looking for a “gentle” read this month; a story that was easy to fall into and kept me engaged. I also thought it might be nice to choose a story with a female protagonist considering we’ve had a number of male protags in our line-up so far. And Big Lies in a Small Town fit nicely within my general preferences for reads: southern historical fiction with an underlying mystery to uncover/crime to resolve. Additionally, it is a current (January 2020) release.

What is the book about? Big Lies in a Small Town is a tale of mystery and murder in sleepy, small-town North Carolina. The story opens with a dead body found near a stream in March 1940. From there, Chamberlain introduces us to two aspiring artists in their early twenties separated by 80 years. In 2018, Morgan Christopher is serving a three year sentence North Carolina Correctional Facility for Women in Raleigh, North Carolina when she is mysteriously released early. In 1940 Anna Dale is living in Plainfield New Jersey when she is selected as the winning artist to paint a mural for the town post office in Edenton, North Carolina. Both are connected by the post-office mural that each have been tasked to complete. In alternate viewpoints and dual timelines, we hear both stories; the mystery of what happened to Anna is uncovered, and connections between the two are revealed.

What did I like about the book? This book is historical fiction and a mystery rolled into one. (I love both genres!) As an amateur artist, the narrative around creativity, artistic impression and technique intrigued me. Both Morgan and Anna are strong characters. Because Chamberlain narrates the story in dual timelines—Morgan in first-person, Anna in third-person-close—I was concerned that I would become more invested in one character over the other. In fact, I was slightly more drawn to Anna’s storyline than Morgan’s. I found Anna’s character admirable. She was independent, ambitious, and confident during a time period and in a place where strong women were frowned upon. I enjoyed her progressive thinking and her ability to make wise decisions, putting herself and her dreams first. Morgan was painfully aware of the consequences for her previous inability to self-regulate. Throughout the story, we experience her struggle to regain both her self-control and her self-confidence. I found some of her self-loathing taxing at times, and her romantic notions were more than a bit annoying. But Chamberlain forces us to experience Morgan’s growth with her. And it works. For me, Morgan’s unwavering determination to finish the mural and unwind its mysteries, is what weds me to her in the end.

What didn’t I like about the book? At first, the use of short chapters threw me but I ultimately fell into the pace of the book. A couple of times, the story seemed to drag a bit and I felt that had Chamberlain cut or combined some of those smaller chapters, the pacing would have benefited. But wanting to know why Anna painted the mural as she did, and why was Morgan was chosen to restore the mural, kept me turning pages until the final word.

Who should read it? Anyone who is looking for a gentle historical fiction and is intrigued unraveling mysterious secrets from the past should read this book. This book is perfect for readers who appreciate ambitious, strong women and who like a story with a hint of romance. It’s a great read for fans of Diane Chamberlain!

Share your thoughts in my April Book and Wine Club discussion