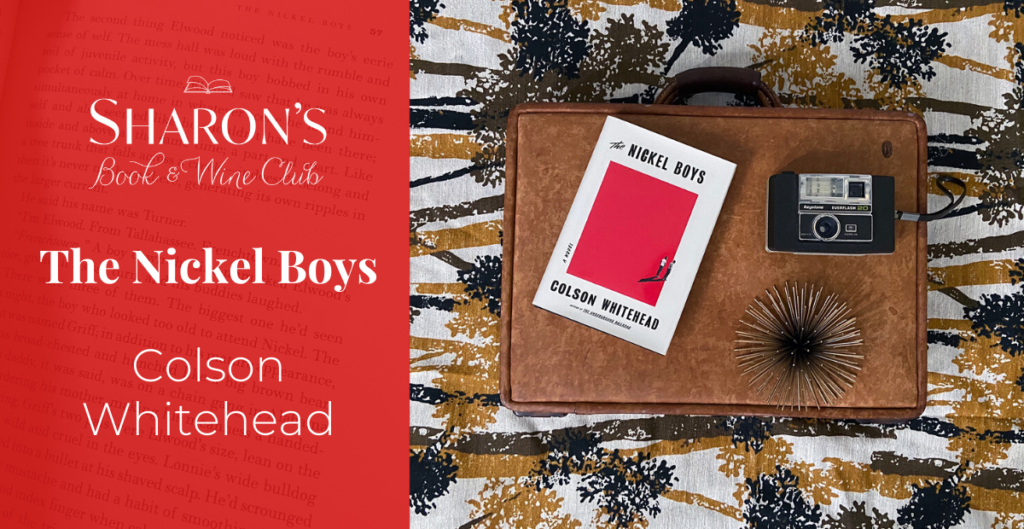 For this month’s book club, I selected The Nickel Boys by Colson Whitehouse.

Why I chose this book?  Released in 2019, The Nickel Boys was named by Time Magazine as one of the ten best books of the decade. Additionally, Colson Whitehead is a Pulitzer Prize winning author. Coming off the heels of Black History Month, I wanted to delve into serious African-American story by an African-American author.

What is the book about? This thought-provoking story is inspired by events at the real-life Dozier School for Boys, a now-closed reformatory school in Florida that operated for more than a century. When the facility first opened, it promised to deliver a more enlightened style of reform for troubled youth, but soon devolved into an institute of abuse, rape, and murder.

The story is centered around Elwood Curtis, a strait-laced, scholarly African American teen who dreams that all things are possible. Through no fault of his own, Elwood finds himself at the Nickel Academy, a state-sponsored reform school for boys. It is here that Elwood meets Turner and a host of other black boys trying to navigate the system and work their way out.

At first glance, Nickel Academy appears innocuous with its trim lawns and neat red-brick buildings. Elwood soon realizes that the Nickel Academy is anything but, with its sadistic staff and corrupt officials who systematically abuse the children. Any boy who resists is tortured, and those who repeatedly cause trouble are likely to disappear. Horrified to find himself in such a vicious environment, Elwood tries to hold onto Dr. King’s teachings. His friend Turner thinks Elwood is naive and that the only way to survive is to scheme and go along. As their friendship deepens, the fate of the pair rests not only on their ability to endure, but on courage forged by trust in each other.

What did I like about the book? I personally found this book nearly impossible to put down. Whitehead keeps the story moving, often allowing the reader’s imagination to fill in the gaps of Elwood’s journey. Whitehead’s sentences are chiseled into rhythmic fragments and shards of conversations that are beautifully constructed. The prose is simply written but the plot intricate and emotionally difficult. I find stories written in this fashion refreshing and fast moving, even if the story isn’t moving at all. But Whitehead is careful to stick with a classic three-act structure, keeping the plot moving on pace.

As I fell into the story, I felt such empathy for Elwood, a principled teenager who strives to do the right thing in a world where the adults around him do just the opposite. His reliance on the teachings of Dr. Martin Luther King  Jr. keeps him grounded, even when the world around him is evil and abusive. I especially loved the beginning of Part Three, where Whitehead propels us forward to Elwood as an adult living in New York City. At the time, I questioned Whitehead’s decision in revealing his ending so early, but I found comfort knowing that Elwood had survived the Nickel Academy. With my fears assuaged and my curiosity piqued further, I plowed on, wanting to find out exactly how Elwood gained his freedom. As I reached the final chapters, I found that Whitehead had brilliantly answered my questions.

What didn’t I like about the book? The horror of the abuse is tough to read. And for me, what made it more difficult was knowing the truth of the story.

Who should read it? Be warned, this book can be tough to read at times. If you love moving stories that are rooted in truth, no matter how ugly that truth might be, you will want to read The Nickel Boys. If you are a fan of Colson Whitehead’s Underground Railroad, this book is a must read. If you liked the movie “Shawshank Redemption”, this book is for you.

If you have difficulty reading troubling stories, especially those involving children, this book isn’t for you.

The Nickel Boys is a searing reminder of our not-so-distant past, and a story we should never forget.

Share your thoughts in my March Book and Wine Club discussion