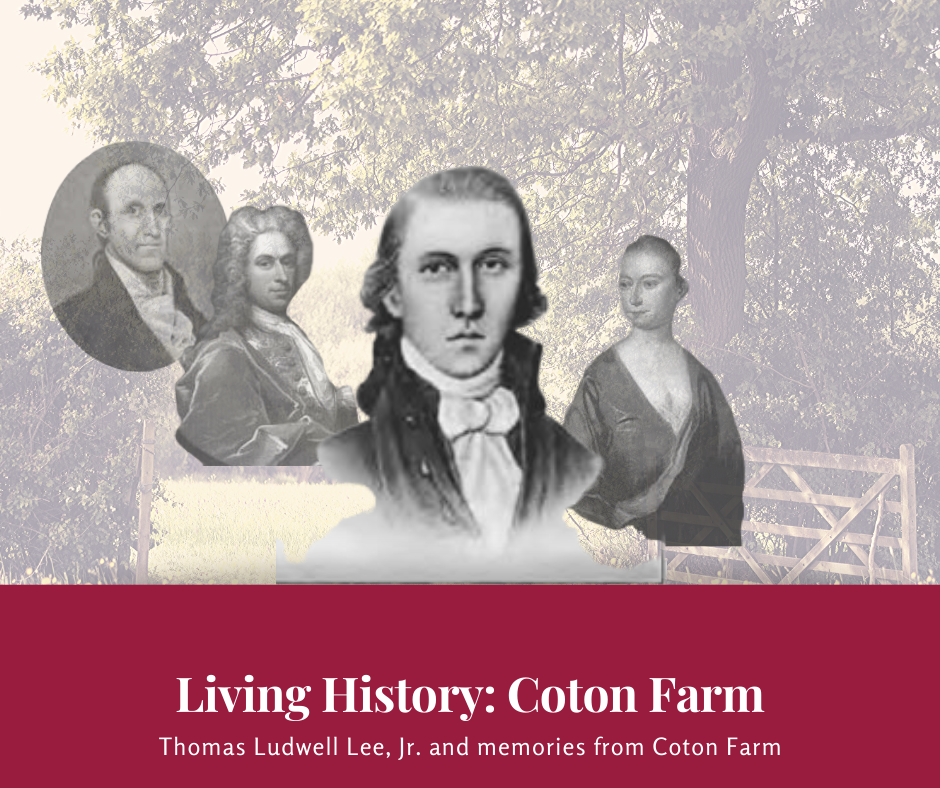 When Thomas Lee (1690-1750) of Stratford Hall, first saw the land where the Potomac River and Goose Creek met, he made arrangements to have 800 acres of that land set aside for himself. Thomas Lee and his wife,

Another son Thomas Ludwell Lee, Sr. (1730-1778), was a member of the Virginia Delegates and editor of the Virginia Declaration of Rights.  He married Mary Aylet and resided at Belleview plantation in Stafford County. Though he preferred local politics to those at the national level, Thomas’ tenacious

support of his brothers and the daring ideals they represented kept Virginia at the forefront of political thought and action. As a Virginia legislator, Thomas worked to revise state laws, and Virginia served not only as an inspiration to other colonies but became an archetype on which the new American government would be based. The career of this much-beloved man was cut short soon after his election to Virginia’s first supreme court. At the age of 48, he died of rheumatic fever.

It was his namesake, Thomas Ludwell Lee, Jr. who would inherit the land where Coton Farm would be built. By 1796, Thomas Ludwell Lee, Jr. (1752-1807) with his wife, Frances “Fanny” Carter (1760-1850), daughter of Robert Wormley Carter of Sabine Hall, had built Coton’s manor house and named the farm after the Lee family ancestral home in England. Thomas set out to improve the land by switching crops from tobacco to wheat and corn, enlarging the mill, and building a distillery and a meat house.

Thomas Ludwell Lee, Jr. was only 55 years old when he died in 1807. According to the record, he left his 36-year-old widow Fanny with eight young daughters and a mountain of debt. In addition to raising her daughters alone, Fanny managed the farm and ran the business. She was tough and tenacious, fighting off creditors and paying off the debt left by her husband.

Memories of Fanny Carter Lee were preserved by her granddaughter, Sally McCarty Pleasants, in 1916. In her book Old Virginia Days and Ways, she writes: “My Grandmother, Fanny Carter of Sabine Hall, married Thomas Ludwell Lee of Coton and came down to breakfast on the morning after her wedding in a “queen’s nightcap”, an elaborate structure of muslin and lace which completely covered her beautiful auburn hair. From that morning, not long after her sixteenth birthday to the day of her death at the age of eighty, she was never free from the thralldom of caps.”

“She became the mother of a large family and the mistress of many slaves. In spite of the isolation of the plantation, she fell victim to smallpox. When her husband, who was absent at the time of her illness, saw her face for the first time after his return, fainted with the shock of her altered appearance. At the age of 36, she was left a widow with eleven children.

“My mother’s name was Anne Lucinda Lee. Until her marriage, she lived at Coton on the Potomac. Often she told me that her childhood was ideally happy. In the summer, she with her sisters played all day long in the garden where they made baby-houses under the low branches of the old pear trees. Their dolls were of wood, cunningly carved and painted. My mother’s had blue eyes and yellow hair like her own; Aunt Fanny’s, like its little mother, was a brunette with brown eyes and raven curls. My mother’s doll must have been made from scented wood, for she always smelt a sweet and pungent fragrance whenever she kissed it. For their amusement in bad weather, the girls danced or played battledore and shuttle-cock in the long corridor.

“In the winter they went to school to M. Mongrand, their tutor. M. Mongrand, an abbe forced to leave France during the Reign of Terror, took up teaching as a means of livelihood. The office, a small detached building such as was provided on every estate for the transaction of business, remained unused at Coton on account of the death of the master. It was turned into a school room and here, the old émigré lived for seven years, teaching his pupils a good deal of French and a little English. He loved the household of his adoption and gave the girls pretty French nicknames which characterized them according to his fancy. Winifred, the studious, was La Bonne. Betsy, the sleepy head, La belle Doremuse. Fanny, the beauty, was Vénus.”

Although the manor house at Coton is no longer standing, I can picture the pastoral setting in my mind… the summer breezes tossing the leaves of that old pear above the heads of those young girls playing with their dolls under its shade…that one-room schoolroom with a graying Frenchman instructing the children as snow was gently falling outside the windows of the stone building…the girls sliding over the wooden hall floor in their stocking feet as rain pattered on wavy glass panes overlooking the courtyard. Can you see it? Can you feel it?

It’s memoirs like Sally Pleasants’ that keep these old places alive long after they are gone. And while Mrs. Pleasants’ recollection of the facts may not be entirely consistent with the record, her documentation of her mother’s and grandmother’s memories give us so much more than names and dates in books and on microfilm. She leaves us with an impression of what it was actually like to be at Coton Farm more than two centuries ago. And that, my friends, is what I call Living History!